Police arrest one man in shooting of 2 detectives in Camden, New Jersey; 2 remain at large 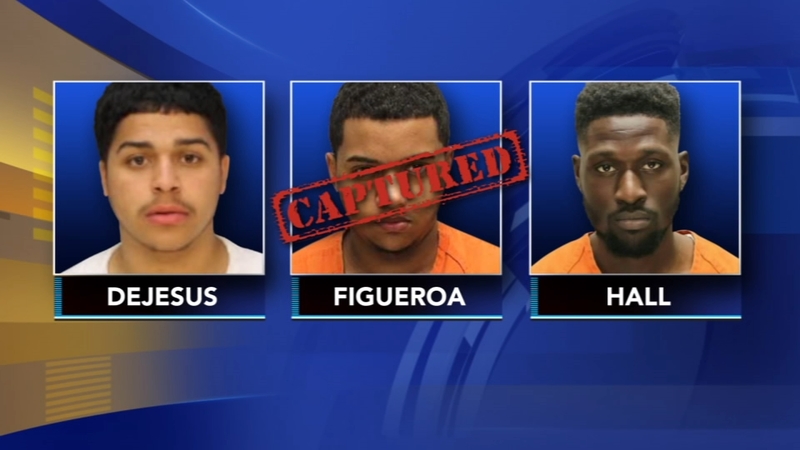 CAMDEN COUNTY, N.J. (WPVI) -- Authorities say one man is in custody and they continue to look for two other men in connection to the shooting of two undercover detectives that took place on August 7th in Camden, New Jersey.

Arrest warrants have also been issued for 19-year-old Alexander DeJesus of Philadelphia, 26-year-old Ammar Hall of Camden. All three are charged with first degree attempted murder.

Authorities believe that the other men are still in the Philadelphia/Camden area, and say these individuals are considered armed and extremely dangerous.
EMBED More News Videos

Warrants issued for Camden police shooting suspects. Watch the report from Gray Hall on Action News at 4 p.m. on August 17, 2018.

The Camden County Prosecutor's Office released surveillance video earlier this week in connection with the shooting.

Arrest warrants have been issued for Alexander DeJesus (left), Ammar Hall (center), and Juan Figueroa in the shooting of two detectives in Camden, New Jersey on August 7, 2018.

In the video, a man can be seen wearing a do-rag and later without his shirt on.

Rewards totaling $60,000 are now being offered as the search continues for the two other suspects.

The two plainclothes Camden County detectives were sitting in their vehicle at a red light in Camden when a van pulled up, two people got out, and opened fire on the officers.

Authorities say 25 rounds were fired in a matter of seven seconds.

One of the detectives was able to return fire, but it's not clear if anyone else was shot.
EMBED More News Videos

Police are asking anyone that has information that might lead to the arrest of the suspects to contact Camden County Prosecutor's Office Major Crimes Detective Matt McKeown at (609) 820-7192.