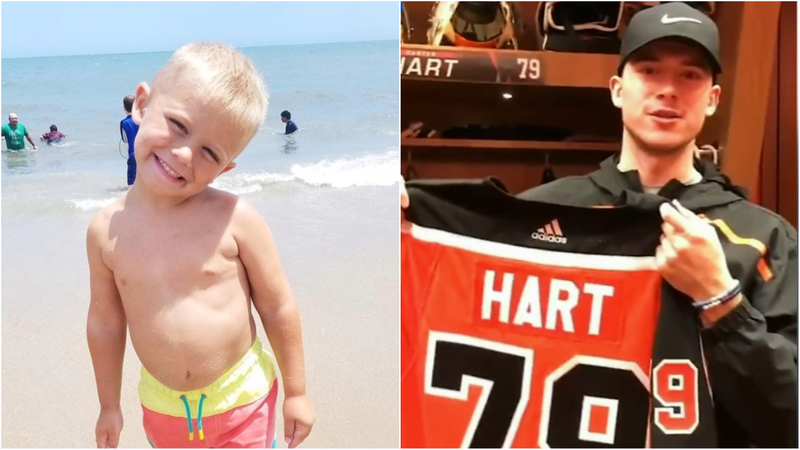 Allison Gettler was told in June that her 5-year-old son Carter had Langerhans cell histiocytosis, a rare form of pediatric cancer. Carter has lesions on his skull and a tumor behind his left eye.

Carter, who is a big Philadelphia sports fan, has been undergoing chemotherapy since July and during treatments, he always wears the shirt of Flyers goalie Carter Hart to bring comfort.

"He powers through a lot. He looks on the bright spot a lot, that's what I admire about him going through this," said Gettler.

When Hart heard about the young boy through the family's Instagram page, he got involved, buying "Coco Strong" bracelets to raise awareness and money for treatments.

Hart sent his number one fan a gift with this message, "Stay strong and keep fighting buddy, I got your back."

"That kind of stuff means the world to us, lifting up his spirits is so awesome," Allison said while fighting back tears.

"Yeah that was cool to see. He looked like he was a little shy for the camera, but I saw his sister read out loud what I wrote on the jersey. Like I said, I just wanted to brighten up his day. He's going through a bit of a tough time, so anything I can do to help. I'm glad to do it," said Hart.

"It makes me happy that my kids can see somebody doing that and wanting to make someone's day a little brighter," said Allison about the nice gesture.

The family is praying by July, Carter Gettler can be declared "non-active." During this difficult time, the love and support from his favorite player is helping them get through this.