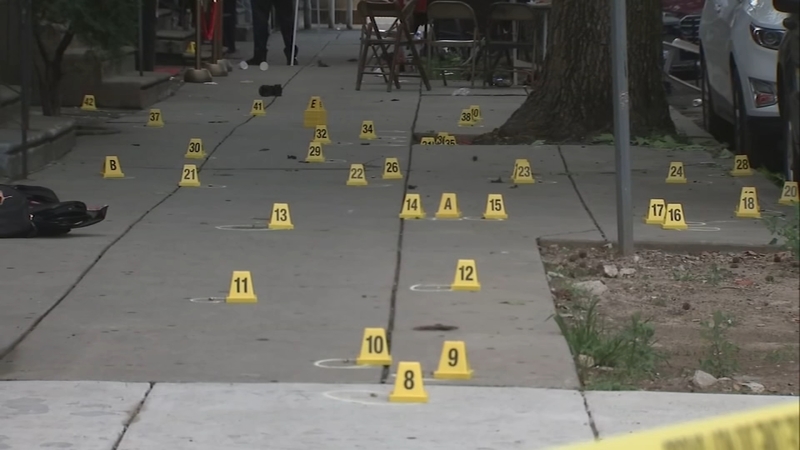 3 dead, more than a dozen injured in weekend bloodshed

PHILADELPHIA (WPVI) -- Three people are dead and more than a dozen are injured after rapid gunfire rang out across Philadelphia this Father's Day weekend.

Two other victims are recovering after being stabbed in two separate incidents, authorities said.

On Sunday, Philadelphia police investigated at least five shooting incidents across the city.

Police say three people were shot around 7:10 p.m. on the 2600 block of West Seltzer Street.

A 14-year-old male, a 35-year-old man and an 18-year-old man were all shot multiple times, police said. All three victims are currently listed in critical condition at Temple University Hospital.

Police say the man is currently hospitalized in stable condition.

Around 2:27 a.m., police say a 24-year-old man was shot five times throughout the body. He was rushed to an area hospital where he later died.

A 21-year-old man was also injured in the shooting. He is currently hospitalized in stable condition.

Police say a 24-year-old woman suffered a graze wound around 3 a.m. on the 3000 block of W. Colona Street. She is expected to survive.

And just after 4:30 a.m, a 30-year-old man was shot once in the chest, police said. The man is expected to survive.

Two men were killed and a child was injured on the 1600 block of North 55th Street in West Philadelphia around 2:22 p.m.

According to police, two 23-year-old men were shot multiple times across the body and died from their injuries.

The child, a 3-year-old boy, was shot multiple times in the leg. He is currently listed in stable condition, officials said.

Philadelphia police are investigating a triple shooting in West Philadelphia that left two men dead and a 3-year-old child injured.

Just hours later, around 7:25 p.m., at least 50 shots were fired into a crowd of about 30 people celebrating a high school graduation.

"You have a family that is gathering to celebrate the advancement of one of their kids having graduated high school and they have to suffer this," said Inspector D. F. Pace with the Philadelphia Police Department.

So far, no arrests have been made in connection with these shootings.