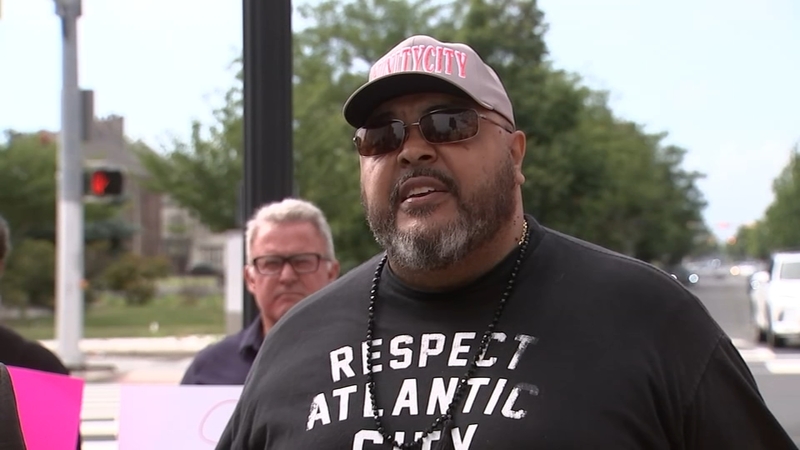 ATLANTIC CITY, New Jersey (WPVI) -- Two Atlantic City Council members are among those calling for the New Jersey State Police to be brought in to help curb the recent gun violence.

The call for help comes in the wake of a deadly quadruple shooting on the 1700 block of Atlantic Avenue Sunday night.

The Atlantic County Prosecutor's Office identified the victim who died in the shooting as 23-year-old Azaiah Grissom.

On Monday she was joined by community members and City Council members Latoya Dunston and Moisse Delgado, pleading for help from the state to stop the violence.

Police in Atlantic City, New Jersey are investigating a shooting that left one man dead and three others injured on Sunday night.

"This war has been going on for a long time, it's not just yesterday. My son will never be able to use his arm again. He got two daughters and a job, what's he going to do?" said Faulkner.

"Send in some assistance with the state police. We're told we don't have enough police officers, then we need to send someone in here that can help us," said Councilwoman Latoya Dunston of the 2nd Ward.

"Gov. Murphy, thank you for all you've done but we need you to come and help us with this situation going on," said Atlantic City Council Vice President Moisse Delgado.

"I don't care if they got Army men out here on each corner with guns. I'll feel more safer with them than I do out here. Out here it's the Wild West," said Soliman.

According to the two council members, homicides are now out of control.

"In 261 days, we have had 16 shootings and 14 murders. We cannot pretend that this is normal," said Dunston.

But also on Monday, Mayor Marty Small held a press conference as well.

"I want the public to know that my administration takes these actions very seriously. We are giving the police all the tools that they need to succeed, and we're going to need help," said Small.

But he doesn't see bringing in state police or outside resources as the right fix.

"Their solution is to bring in the state police to take over our police department? Like are you serious?" said Small.

He's calling on everyone in the city to do their part.

"This is a call for the community, all levels of government do not raise your children. Police your home, collectively, let's police our community," said Small.

No arrests have been made in connection with the quadruple shooting.