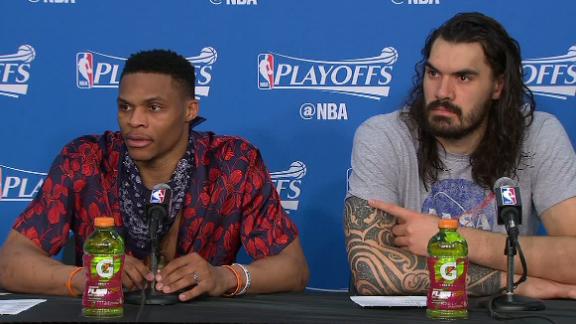 OKLAHOMA CITY -- Thunder guard Russell Westbrook went on a rant defending his teammates after Sunday's 113-109 loss to the Houston Rockets.

A recurring theme throughout the series has been Oklahoma City's tendency to lose leads when Westbrook sits in the second half. It happened again on Sunday __ the Thunder were outscored 13-4 in a stretch that lasted from late in the third quarter to early in the fourth. The lapse turned a 75-68 lead into an 81-79 deficit.

Thunder center Steven Adams was asked about the issue, and Westbrook interrupted .

Russell Westbrook goes off on reporter who asks about team's play while he's on the bench pic.twitter.com/oikTf0GxCj

"Hold on Steven," Westbrook said. "I don't want nobody to try and split us up. We're all one team. If I go to the bench and Steven's on the floor and I'm off the floor, we're in this together. Don't split us up. Don't try and split us up. Don't try to make us go against each other or make it Russell and the rest of the guys. Russell against Houston. I don't want to hear that. We're in this together. We play as a team. That's all that matters."

When pressed on the matter, Westbrook became more agitated, repeatedly saying "Next question."

"Say 'Russell, the team hasn't played well,'" he said. "Don't say, 'when Russell goes out the team doesn't play well.' That doesn't matter. We're in this together."