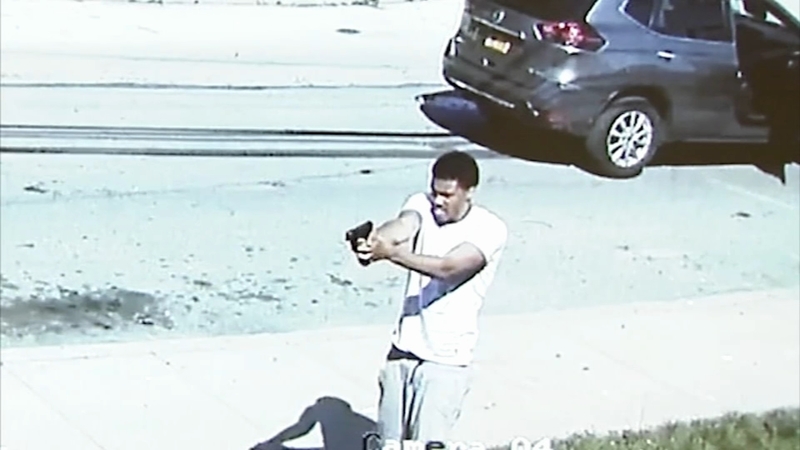 CHESTER, Pa. (WPVI) -- Two men have been arrested for a brazen daylight murder earlier this year in Chester, Pa.

Prosecutors said the crystal clear surveillance video shows 28-year-old Eric Johnson of Chester firing multiple times at the victim, 36-year-old Vincent Franklin, in the 500 block of Central Avenue in Chester on May 21.

Johnson and the accused driver of the Nissan Rogue, 28-year-old Byron Minor, were arrested and charged with multiple offenses including first and third-degree murder on Tuesday.

"As I look at that video, it is horribly brazen. It's almost execution style from the very moment he gets out of his vehicle. Not even seconds elapse before he is raising his arm because you know his intent is clear. He intends on murdering the victim," said Copeland.

As the pair fled the murder scene in May, investigators said they encountered Folcroft Police officers who spotted the Nissan Rogue. The suspects jumped out of the car and fled.

Johnson allegedly pointed his gun at Folcroft Officer Christopher Dorman, who had survived being shot in the face in 2016 by a suspect and returned to the job months later.

Officer Dorman fired shots, police say, but did not hit the suspects who remained on the run until their apprehension Tuesday.

The Delaware County District Attorney credited the high-quality surveillance video and witness testimony for helping track down the murder suspects.
"This is unacceptable. We will continue to pursue the criminals who commit these kinds of crimes in our neighborhoods," he said.

Both Minor and Johnson are set to be arraigned in Chester Tuesday evening. The District Attorney was asking for no bail. Both face life in prison if convicted.

The DA said Johnson is likely to be charged with aggravated assault for his encounter with Officer Dorman in Folcroft, but that charge has not yet been filed.