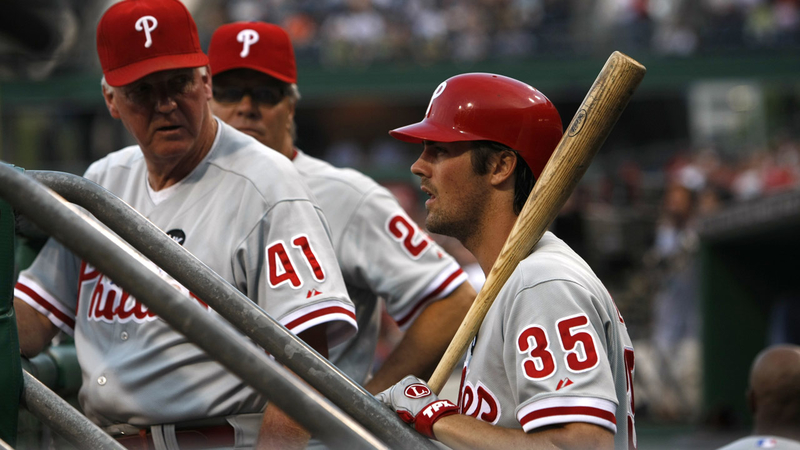 PHILADELPHIA -- It will feel like 2008 again in South Philadelphia on Wednesday night, with just a few changes.

The 2008 World Series Champion manager Charlie Manuel will begin his new job as hitting coach as another familiar face makes his return to Philly in a different uniform.

Now an ace for the Chicago Cubs, Cole Hamels is set to pitch at Citizens Bank Park for the first time since the Phillies traded him to Texas in July 2015.

At Sunday's Phillies game against the Braves, fans flocked to Citizens Bank Park, including one fan who isn't ready to let go of his Cole Hamels Phillies' jersey.

Hamels spent 10 seasons with Philadelphia and was the MVP of the 2008 World Series and NL Championship Series.

Hamels is 6-3 with a 3.09 ERA in 19 starts this season. He strained an oblique in late June and missed more than a month. Hamels struggled in his latest start, Thursday against the Cincinnati Reds, lasting only three innings and allowing five runs (four earned) on eight hits.

"With the guys we have off the bench now, it's a deep lineup, and that's what takes us far," Hamels told reporters.

Manuel, who was working as senior adviser to general manager Matt Klentak, will join the Phillies exactly six years after managing his last game.

His 780 wins as manager are the most in team history.

The franchise icon was hired to replace John Mallee as hitting coach.

He's got a lot of work to do to revive an underachieving offense that overcame 15 strikeouts for the win Tuesday night, but the pitching staff did the job against the NL Central leaders.

J.T. Realmuto homered and drove in the tiebreaking run with an RBI double in the seventh inning to lift the Phillies to a 3-2 victory over the Cubs in the first game of the series.

The injury-riddled Phillies absorbed another blow when outfielder Corey Dickerson was hit in the hand by a pitch and was forced to leave the game. Dickerson's availability for Wednesday was unclear.

Though the Phillies won the series opener, the firing of their hitting coach had to be a wakeup call.

"Ultimately, it falls on the shoulders of the players," first baseman Rhys Hoskins said. "We can sit here and play the what-if game, but the front office has made a decision that they think will put us in a position to make a run here."

On Thursday, Nola gave up seven hits and three runs in five innings in a 5-0 loss to the San Francisco Giants.