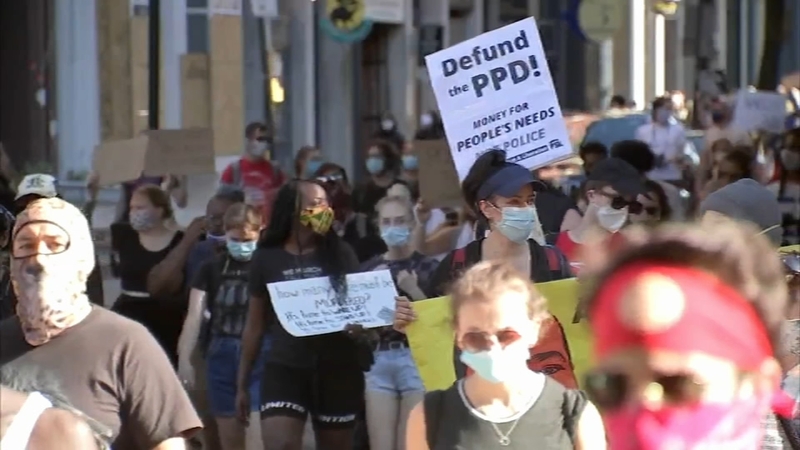 The Center City rally was held at 3:15 p.m. as activists push for Philadelphia Mayor Jim Kenney and City Council to defund the city's police department.

The concept, which has been open to interpretation has been gaining momentum in ending police brutality and racial injustice.

In this demonstration, protestors say they aren't necessarily looking to eliminate police, instead, they want to see money reallocated from their budget towards more social services.

Demonstrators marched down from the 400 block of North Broad Street, which is future police headquarters at Broad and Callowhill streets in Spring Garden.

"We have more than enough police in the city. There are some places where you're being policed by five separate police forces," said Shane Riggins, one of the protest organizers. "We don't need anymore. We need less and we need to give that money to people who actually need it which is our community."

While aware that the majority of City Council and the mayor have signaled they don't support a $14 million police budget increase for next year, Riggins says it's a start, but not enough.

"We want to see 50 percent of the budget slashed, said Riggins. "We want them to severely decrease their forces. They have more than enough officers."

The rally comes just six days after City Council informed the mayor that it would not accept a proposed $14-million policing budget increase.

Due to protest activity, Center City traffic closures were in effect. I-676 was closed between I-76 and I-95. Roads were also closed from 5th Street to 18th Street from Walnut Street to Vine Street.

As protestors made their way from City Hall down to Old City, we met some who say they march to be the voice of so many who've been silenced.

One of the men, a FedEx worker, has been terminated from his job. The other man, a New Jersey Department of Corrections Officer, has been suspended.
Hundreds more were moved to action, protesting again in the name of racial reconciliation and peace.

A peaceful protest in Franklinville, New Jersey was held just days after marchers on the same stretch of roadway were met with two men mocking George Floyd's death.

"Were out here today, my family and I brought my three kids because I want them to see we're all together and everyone can make a difference even the young ones," said Jason Patton, one of the protesters.

Russell Sampson of Franklin Township captured the act on video last week and his response to it was to get more peaceful protestors to march again today.

"We experienced absolutely no issues, we did march by the incident, there was no one out there," said Sampson. "There were individuals who had BLM signs, the police were out there, it was peaceful."

Monica Hayman of Franklin Township said, "One of the owners of the home was actually standing on his porch, so he was able to take all that in."
Hayman says law enforcement was very active in not just ensuring the protection of the marchers, but also the protection of that citizen because he is in that community as well.
Report a correction or typo
Related topics:
community & eventsphiladelphiagloucester countyprotestgeorge floydpolice
Copyright © 2021 WPVI-TV. All Rights Reserved.
TOP STORIES
2 shot after altercation in Wawa parking lot; suspects wanted
Phillies vendor celebrates 50 years at ballparks
Philadelphia surges past 400 homicides for year
Gabby Petito honored at memorial service on her native Long Island
4 teens charged for plotting attack on Columbine 25th anniversary
Officials investigate after Amtrak crash involving train from Chicago
Police: Triple shooting leaves teen girl dead in Trenton, NJ
Show More
Ben Simmons says he's done with the Sixers. What will the team do now?
Man attempts to storm cockpit, strangles attendant on JetBlue flight
Rep. Kevin Boyle arrested after violating protection from abuse order
3 people dead after Amtrak train derails in Montana
OH haunted house actor stabs boy, 11, while trying to scare him
More TOP STORIES News