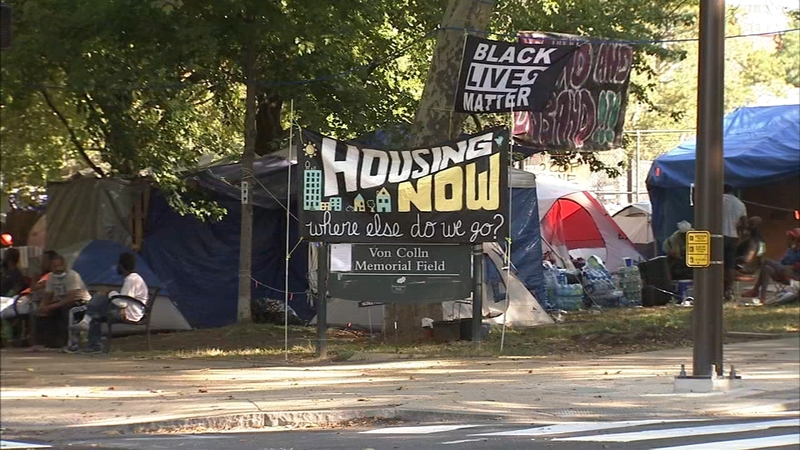 PHILADELPHIA (WPVI) -- Organizers of an encampment of homeless people near Philadelphia's Benjamin Franklin Parkway are vowing not to leave despite the city's announced intention to clear the camp by week's end.

"Residents have decided they're not leaving," one organizer, Jennifer Bennetch, told reporters Monday. "Organizers have advocated that they stand up for themselves. We're not going to get kicked around by the city like a soccer ball."

Another organizer, Scott Matt, said the group now has the city's attention "because we're visible all in one spot" and cannot leave that place.

However, some tents from the encampment on the Ben Franklin Parkway have moved to the Azalea Garden in Fairmount Park.

City officials last week announced that the grouping of scores of tents will be removed Friday from the athletic field where they've been for the past month. They called it a "last resort" but said organizers had refused all offers and kept changing their demands, and it was hard to tell who was speaking for the full group.

Philadelphia Housing Action, a coalition of groups that organized the encampment, said it was conceived as a form of political protest over city policies toward the homeless and the lack of low-income housing in the city.

Many speakers said Monday they had little faith in officials' comments that they were open to providing small houses.

On Tuesday, the City said the tents in the Azalea Garden are part of the Parkway encampment, so they do expect them to be part of the Friday deadline.

Last week, the City said it tried to reach an agreement peacefully but when outreach workers entered the camp some people got violent. Organizers denied this claim.

As of now, it is unclear how people will be moved if they don't choose to leave on their own.