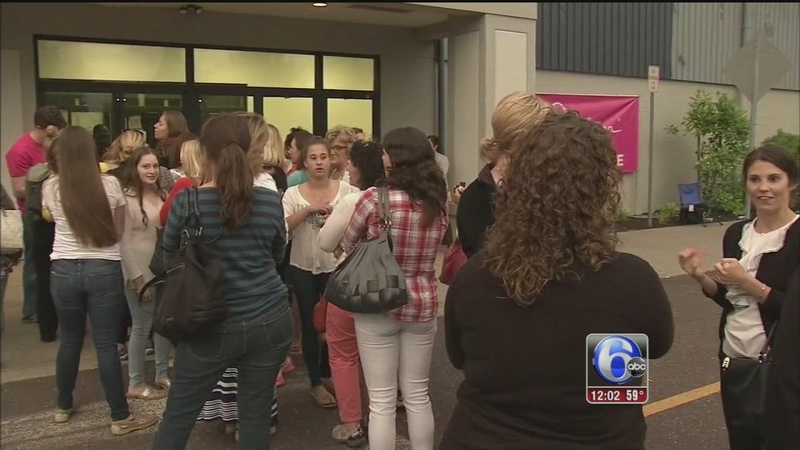 OAKS, Pa. (WPVI) -- Call it a case of retail rage - instead of paisley and pink, shoppers were seeing a deep shade of red after the first day of a Lilly Pulitzer warehouse sale ended abruptly early.

"I've never had a problem getting in the first day of the sale," said Cathy Hedegard.

Upset shoppers attending the Lilly Pulitzer warehouse sale wanted answer after they were told the doors were closing early on Thursday night.

The annual sale is at the Greater Philadelphia Expo Center in Oaks, Montgomery County.

"All of these people had been in back of me or before me and have not gotten in at all," said Hedegard.

It's a one of a kind event for the designer clothes that hardly ever go on sale.

It attracts people from all over the country - like Anni Carroll. She drove 10 hours from Charlotte and waited in line with her three children but didn't get in

"It's extremely frustrating. I have three children under three with me. They were not allowed to use the bathroom inside - they closed the doors and wouldn't let anyone in," said Carroll.

"The security guards are actually videotaping us thinking it's kind of funny which is not," said Joanne Resendiz.

No one could get answers - a note on the door said they were closing to restock.

But when our cameras showed up so did the police.

"Unfortunately they're not letting anyone else in the rest of the evening," a police officer announced to the crowd.

Customers then asked the officer to please get a spokesperson and he did.

Reps with Lilly Pulitzer gave out coupons and said those who waited for hours and were still present could come back the following shopping says without any waiting.

"We've been supportive, we wear Lilly all the time - for us to be cut off and not be allowed in is ridiculous," said Resendiz.

Action News reached out to Lilly Pulitzer and a spokesperson apologized saying they were concerned about safety and didn't want to have their customers to continue to be outside - that along with the need to restock was the reason they closed the doors early.

Despite the incident, there were plenty of people camped out Thursday night ahead of day two of the sale which continues Friday morning at 7:00 a.m.
Related topics:
shoppingupper providence township (montgomery county)pa. newsclothingfashionretailshopping
Copyright © 2021 WPVI-TV. All Rights Reserved.
More Videos
From CNN Newsource affiliates
TOP STORIES