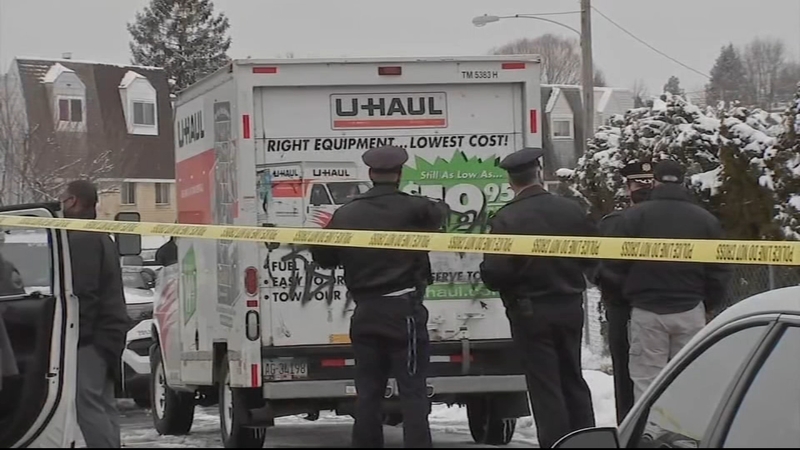 PHILADELPHIA (WPVI) -- Philadelphia police are investigating after multiple body parts were discovered at two crime scenes on Thursday. Investigators said the cases could be connected.

Sources tell Action News a person of interest is in custody for the dismembered body found Thursday.

It was around 9 a.m. on the 1000 block of Sanibel Street in the city's Somerton section when officers found a dismembered body in a trash bag in the back of a U-Haul truck during a traffic stop.

Investigators said someone had called in a burglary in progress at a home and then reported seeing a U-Haul truck leave the scene.

When police pulled the rental vehicle over, the driver and passenger inside did not try to run. Instead, the driver was candid with officers, according to police spokesperson Sgt. Eric Gripp.

"The vehicle pulled over, and as soon as the officers got out of the car the driver of the U-Haul just came right out the door and said, 'I don't want anything to do with this,' and 'There's a body in the back,'" Gripp said.

The truck driver and the passenger were taken into custody. A weapon was also found in the back of the truck, investigators said.

On Thursday night, officers found more body parts, specifically a leg and a hand, in a dumpster behind a Wawa at Kelvin Street and Bustleton Avenue less than a third of a mile away from the first crime scene. Police said the body parts could belong to the same victim.

Sgt. Gripp said police were called by a neighbor to the same home on Sanibel Street on Wednesday by a neighbor for a welfare check. Officers walked around the perimeter but saw nothing unusual.

Police have not said if the body found in the U-Haul was positively identified as Gerold. Sources, however, said investigators also found pieces of body parts in an unattached garage behind his home and it looks like someone tried to burn the body, too. Sources also tell Action News the body parts were cooked in some type of cooking oil, which is why the body was described as burned.

Friday ACCT Philly and the Pennsylvania SPCA were called to remove more than 30 birds including valuable African grey parrots and sun conures, five tortoises, three bearded dragons, and a tank of hissing cockroaches, to take back to shelter. They will not be put up for adoption.

"We are not going to be adopting them out. We are going to be working with our rescue partners that we already worked with in the past, who really have an expertise," said Sarah Barnett, from ACCT Philly.

He also grew honey and would deliver to his neighbors, said next-door neighbor Tiffany McLean.

"We figured he was always helping them do something, you know... I guess this is his payback for doing something nice," said Xander.

The two men taken into custody have not been charged.