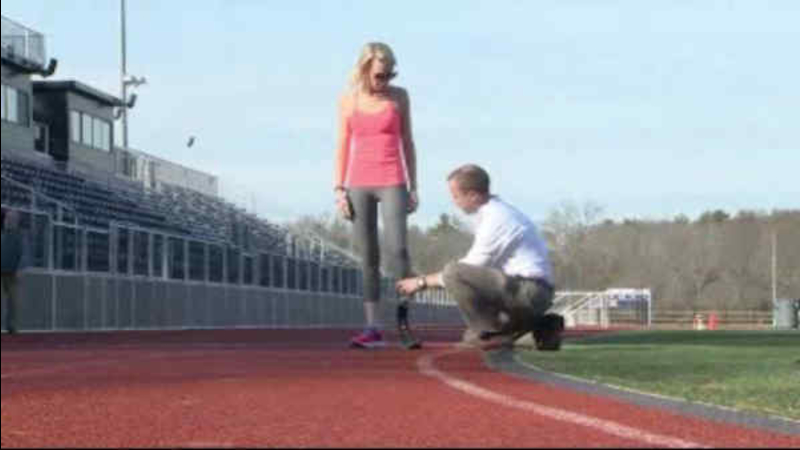 BOSTON (WPVI) -- A survivor of the Boston Marathon bombing is taking on a new mission.

Adrianne Haslet lost a leg in the attack, and this April, she plans to be the first of the amputee victims to run the full marathon.

"I used to say, 'If I were running, people should be running too,'" she said. "Because clearly something is terribly wrong."

Haslet is running with a purpose, despite the pain.

"It's a muscle memory in order to learn how use a blade," she said. "And I never want to give off the impression that you just put it on and go."

She has started training to run the marathon this year, and she says her motivation is very simple: to run for those who can't.

"This is a way for me to give back, not only to physically run the marathon, to say a giant thank you to everybody, but also to remember those who are sitting on the couch," she said. "Who don't have legs because of insurance coverage, who are on the waiting list for Limbs for Life."

Her run will be more than just another inspiring act. She will be running to raise money and awareness for Limbs for Life, an organization that provides prosthetics for a lifetime to amputees who cannot afford them.

She is a professional dancer and even returned to the finish line to dance away the nightmare. The healing is an ongoing process, and running the 120th Boston Marathon will be yet another step, a 26.2 mile victory lap.

"I think the second I turn onto Boylston Street, I may, I'm hoping, to have enough oxygen to cry and run at the same time."