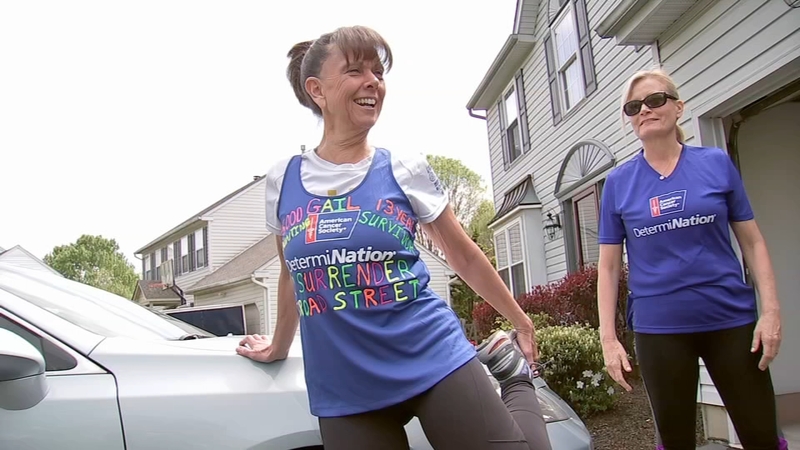 Local cancer survivor running Broad Street for a good cause

DOYLESTOWN, Pa. (WPVI) -- The more than 40,000 people taking part in Sunday's Broad Street Run do it for a variety of reasons.

Some for their personal best time, while others want to prove they can complete the 10 miles.

But many also run for a cause, such as Gail Strohmeyer of Doylestown.

Gail did her first Broad Street run in 2001 to raise money to fight cancer.

"My dad passed away from cancer when I was 19," she said.

"I was training for Broad Street when I found out I had cancer," she recalled.

She didn't do the race that year, but she kept training.

"I felt if I gave up running, cancer would have won," says Gail.

Back then, she just pinned a paper sign to her back or shirt, saying she was fundraising for the American Cancer Society.

She hasn't given up wearing signs, but coach Ashley Forsyth says she's now a key member of the ACS DetermiNation team.

"The hard work, surviving, overcoming, doing whatever she can to fundraise for the ACS, and she is the embodiment of this program," says Forsyth.

Gail has won a host of awards as a top fundraiser. Still, running is always personal.

It's for her father-in-law, who died of cancer. Her brother, who lost his battle with prostate cancer last year.

"I hope that he is watching, and proud of what we've done," she says wistfully.

After 13 races, the Broad Street run is now part of Gail's soul and for cancer survivors like her, it's become a lifeline.

"It's our way of showing ourselves that things like cancer and other diseases have not gotten the best of us," she said.