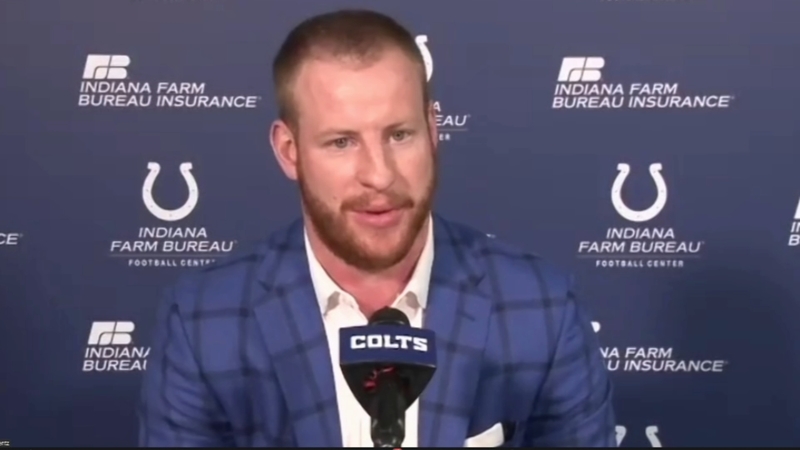 PHILADELPHIA (WPVI) -- We hadn't heard a single word out of Carson Wentz's mouth for a long time... until today.

During his introduction to the Indianapolis Colts media and fans, we heard his first comments about the disastrous ending to his tenure in Philadelphia.

Wentz said he's not perfect and he acknowledged he made mistakes - and he called the whole thing bittersweet.

He also tried to explain what went wrong:

"I'm not going to sugarcoat it -- it wasn't fun," Wentz said Thursday in his first comments since the trade. "It's not fun when things were going well for years and all those things. ... As a man, you have to look yourself in the mirror and learn from it and become a better man, better player. It wasn't fun, it was difficult."

One thing we didn't hear was whether Wentz asked for a trade. He refused to answer, which answers that question for me.

Howie Roseman did say that Wentz's camp thought it was best that he get an entirely fresh start.

And with that comes a fresh jersey number and a hole for the Birds.

The Eagles, who also held a press conference today, are left to pick up the pieces and try to put together a roster.

Roseman did not rule out drafting another quarterback, but he did talk up Wentz's likely replacement.
EMBED More News Videos

Former and current Philadelphia Eagles players are coming to the aid of a superfan after he was attacked online by cyberbullies when he posted a video online wearing a new Carson Wentz Indianapolis Colts jersey.

I'm not sure Jalen Hurts is the answer yet. Four games is not enough of a sample size to make a final decision.

It'll be interesting to see who they draft to put around him.