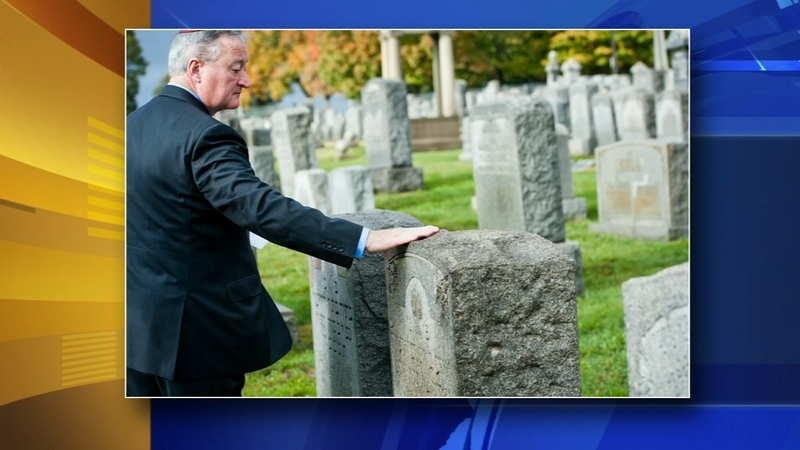 WISSINOMING (WPVI) -- Hundreds of vandalized headstones at Mount Carmel cemetery have been restored to their former glory thanks to the generosity of strangers, and the hard work of volunteers.

The cemetery in the Wissinoming section of Philadelphia was heavily damaged by vandals earlier this year.

Mayor Jim Kenny toured the property on Tuesday, placing decorated pebbles on one of the restored headstones in accordance with Jewish custom.

He then said a prayer that read in part, "May an all-embracing peace shower down from the heavens, refreshing the lives of all the people on Earth."

Some 275 headstones were toppled and damaged by vandals back in February.

So many people are coming out to help clean up the Jewish cemetery that was vandalized over the weekend, organizers are staggering volunteers in shifts.

The Jewish Federation brought in experts to reset and, in some cases, repair cracked stones.

The mayor's focus was on those who intentionally caused damage and hurt.

The mayor recalled helping a man lift his father's pushed-over stone in the wake of the vandalism.

"The man was so distraught so I helped him put it back in place, and I wrenched my back doing it - I'm older than I used to be - but he was happy someone there to help him put that stone back in place. Now it is totally fixed," Kenney said.

The restoration project to place the headstones right and tend to the grounds and grass at a vandalized Jewish cemetery got underway in Philadelphia on Tuesday.

Enough funds were raised that an additional 225 stones that showed signs of stress neglect and age were repaired.

Mt Carmel is a large cemetery, and it is estimated there are another 300 stones in here that could use some rehab.

There have been no arrests for the vandalism.