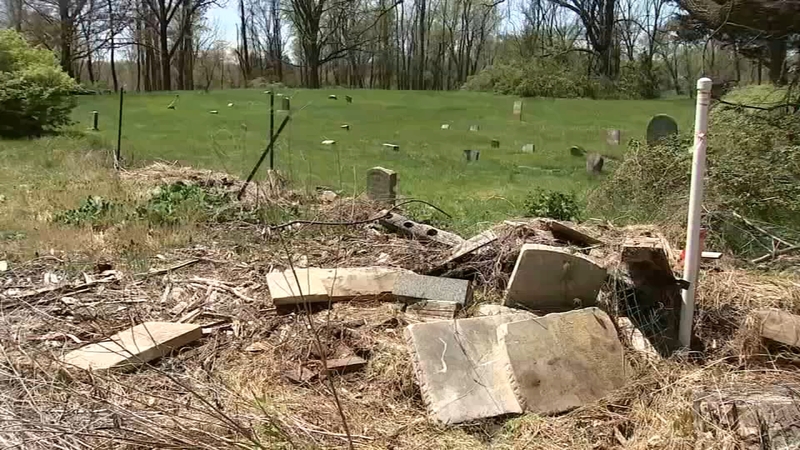 MANSFIELD TWP., New Jersey (WPVI) -- It was a disturbing scene in Burlington County after a cemetery was discovered destroyed.

The tombstones were knocked over, and some even cracked in half.

Now there is an investigation to find out what happened.

Barclay says he has generations of family members buried at Old Friends Cemetery in Mansfield, New Jersey, off Route 206.

He said he noticed tombstones out of place before but hasn't seen anything like this.

"This is shocking actually to me," Barclay said.

Victor Ramos, a concerned citizen, said he noticed something wasn't right either.

"There's a pile of brown tombstones over there, and there's a series of holes. So some of this is pretty fresh like this area here is all brand new," Ramos said.

He adds the damage to the tombstones has been happening for several years.

"It appears that it's not recent. It's been done probably several times in over a period of time, and that is sad," Mojena said.

He says an investigation is underway to find who's responsible for knocking over the tombstones on the land that is privately owned.

A team of archeologists recently had to do a study in the area since a warehouse is set to be built nearby.

It was last month when they brought in construction equipment when the earth was disturbed.

"There is no construction that's going to be at this particular area anyway. It's another lot adjacent on the corner. Nevertheless, special care will have to be taken to show the respect and sensitivity for any burial sites," said Mojena.

The developer regarding Mansfield Cemetery disturbance of gravesites issued a statement that reads:

"As part of the development project approval process, we retained a professional archeologist who conducted a thorough investigation, and we submitted the comprehensive report to the Township."

Any with information about the toppled tombstones, is asked to contact Mansfield Township police.