"They're branding their hate on this and none of these people did anything to any of those people."
WPVI
By Trish Hartman 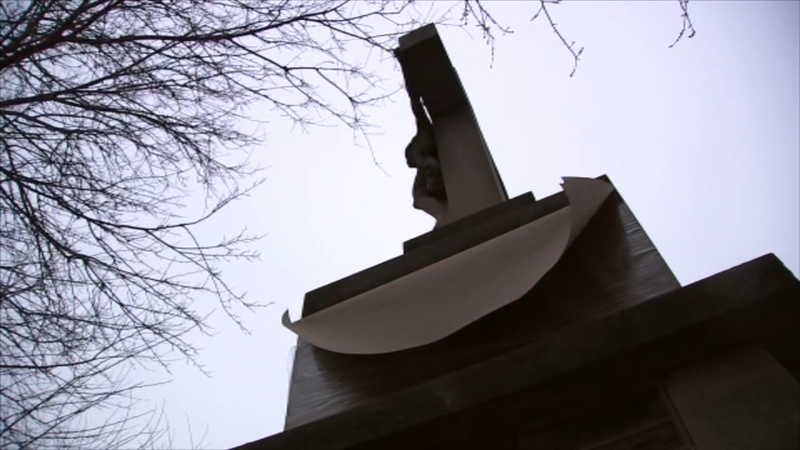 Marianne O'Brien's aunt and uncle are buried at St. Benedict Cemetery in Plymouth Township, Pennsylvania. Now, their shared gravestone is marked with a swastika in orange paint.

"When I saw that on my aunt and uncle's grave I knew I had to just come," said O'Brien.

Her family members are one of many Polish families laid to rest here.

She says on this day, just after Russia invaded Ukraine, the crime feels extra heavy.

"Poland was the first country that Nazi Germany invaded in 1939. Perhaps that's why, but a lot of hatred," said O'Brien.

Plymouth Township Police were called around 6:00 a.m. Thursday when a passerby noticed the graffiti at St. Benedict Cemetery on Colwell Lane.

They soon learned that similar damage was done to St. Matthews and Old St. Matthews Cemeteries in neighboring Whitemarsh Township.

Police say they have a lead.

In addition to hateful symbols, a person's name and an address were written on a headstone.

Plymouth Township Police Chief John Myrsiades said they are not releasing the name at this time.

"Either that was the person who did it, or more likely somebody that had a problem with somebody else. So at least it gives us a lead that we're pursuing to try to get some information," said Myrsiades.

He also said it's unclear why the hateful graffiti was so widely spread.

"I'm torn between being sickened and being sad," he said.

Throughout the day, people came to check on their loved ones graves, horrified at the markings.

"It's a brand of hate," said Robert Templeton, whose mother was laid to rest in Saint Matthews Cemetery in September. "They're branding their hate on this and none of these people did anything to any of those people."

"It's awful. I mean you have loved ones and friends who are buried here," said Vicki, whose father is buried in St. Matthew's Cemetery. "And this is the kind of treatment you get? There's no reason for it."

Detectives are looking for any surveillance video that may be helpful.