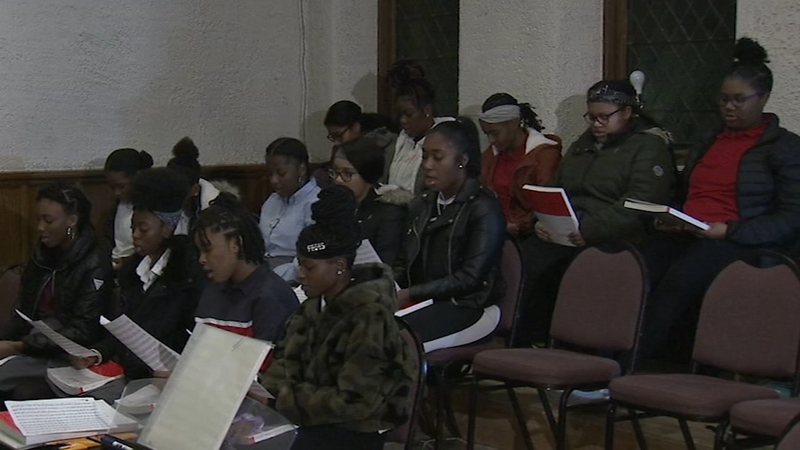 CHESTER, Pennsylvania (WPVI) -- More than 100 talented students from the Chester Children's Chorus were rehearsing for a major performance in late January. And while the chorus is known for putting on a spectacular show, their teacher says the powerful lessons go well beyond the music.

This week, the sopranos, altos, tenors and bass section are rehearsing separately for the big show on Saturday at Broad Street Ministry.

"Being in the choir has exposed me to music and a little different genres of music," said My'Réll Stone, a sophomore at Chester Charter Scholars Academy.

"When I'm feeling down I think of choir, I get excited to come to choir," said Rachael Peterkin, a junior at Archbishop Carroll High School.

But this weekend's performance on that stage showcases more than the awe-inspiring talent of 110 kids. It offers a glimpse into the endless and often overlooked potential of Chester's children. Potential so clear that it made the chorus founder and leader, John Alston, walk away from a tenured faculty position at Swarthmore College to do this full time.

Once considered one of the most violent cities in the country, more than one-third of Chester's residents live below the poverty level and schools are largely underfunded - all real problems many of the children face.

But something happens on that stage when they're singing Handel's Messiah or Mozart's Requiem.

"When folks see us sing, for one hour the world is just perfect," said Alston.

"He brings the music out of the children," said parent, Celeste Peterkin.

The chorus has shows on Saturday and Monday. Then the kids are back to work with rehearsals for a performance of Handel's Messiah in March, something they've been preparing for more than a year.