Children jump from burning 2nd floor apartment, into the arms of bystanders Good Samaritans save children from fire

LAWNCREST (WPVI) -- Terry Phillips had just walked in the door to work when he heard the panicked cries of a woman saying two children were trapped inside an apartment just feet away.

He and another Good Samaritan ran to the back alley, not knowing what to expect.

"There was a lady running around frantic. She can't really get out what she wants to say," he said.

Surveillance video captured the woman, hysterically trying to get help from anyone nearby, as two children believed to be her grandchildren, were trapped in a second-floor apartment on the 6300 block of Rising Sun Avenue.

The two men race to the rear of the building.

"The smoke that was coming out over the heads was so thick, there was no way they were going the other direction," said Phillips. "The kids were just saying we're scared. That's all they could say... 'Please catch me. We're scared.'"

Phillips and another man managed to catch both kids, who were later rushed to an area hospital.

The building's property owner says there were two second floor apartments about the lower level stores.

Sources believe the fire might have started when the children's grandmother was trying to make breakfast, but the blaze remains under investigation.

Many are thankful that this didn't end worse.

"You just see kids, they can't help themselves sometimes," said Phillips. "They wouldn't have made if they tried to jump on their own." 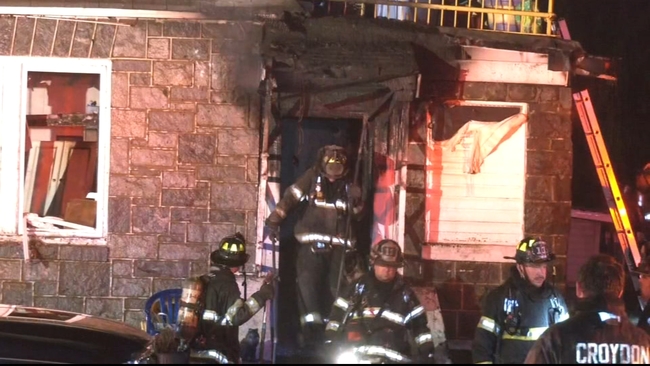