PHILADELPHIA (WPVI) -- More than 80,000 pop culture fanatics are expected to descend upon the Pennsylvania Convention Center in Philadelphia this weekend for Wizard World Comic Con.

There's something for every fanboy and fangirl of comic books, movies, television, sports, and entertainment.

Attendees can mingle with stars from "The Avengers" including Chris Evans and Chris Hemsworth and moments later chat it up with Michael J. Fox and Christopher Lloyd of "Back to the Future" fame.

But the heart of Wizard World is located at the space aptly called Artist Alley where comic book creators, cartoonists, authors, and writers come together to share their passion for the arts with fans.

One of those displaying his craft at Wizard World is South Philadelphia's own Christopher Walter. 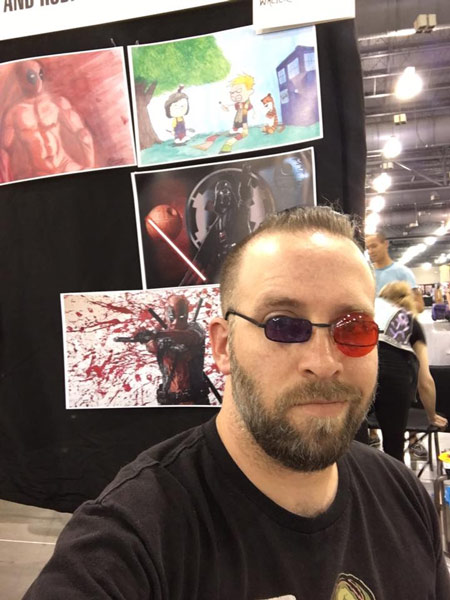 6abc.com had a chance to chat with Chris as he set up his booth.

6abc.com: Chris, tell us a little bit about yourself.

Chris: I live in South Philly about two blocks from the tourist traps known as Pat's and Geno's. I'm 36 years old and work at Escape the 1980s. When I'm not working, I draw the 'Cowboys and Robitussin' comic strip - which I am debuting at Wizard World. I was homeless for a few years, but never gave up on my talents, though that was difficult at times. And my son, Bruce Wayne, will be born in August. 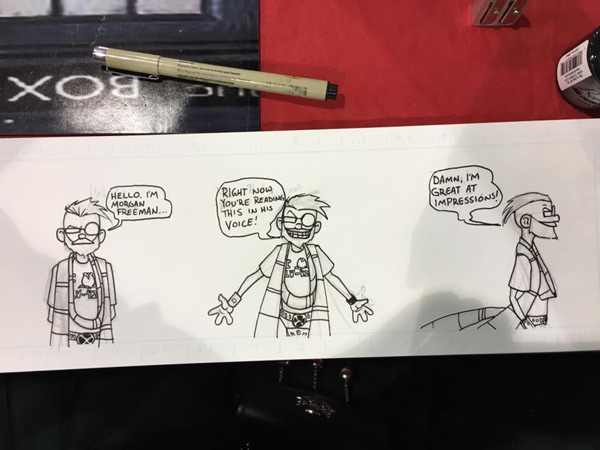 6abc.com: Great name for a son! Now, how did you get into art? Any stories growing up you would like to divulge?

Chris: I've been drawing since I was five. My work wasn't very good then. I started getting into sculpture and painting in my teens. Last year, I decided I should start making money doing what I love so here I am at Wizard World selling my work. When I was growing up, I was always asked to draw stuff for projects at school and in eighth grade I made a four part Terminator comic that ended up being a comedy.

6abc.com: What kind of artist are you? How would you describe your art?

Chris: I do a lot of comic and movie stuff. I can't really say I do just one particular type of art because the media I use is all across the spectrum. I do everything from cartooning to fine art. I've even designed tattoos. I like the results I get from digital painting. I guess you could say I'm an ADHD Artist. I'm all over.

6abc.com: Have you had a booth at Wizard World before? What was that like?

Chris: I had a table last year and I was grossly under-prepared. I barely sold anything. This year I am much more prepared with better work. It's still super exciting to be doing this. I've been going to Wizard World for almost 10 years. Having a table in Artist Alley is...the best way I can describe it is that it gives me the same feeling as having a speaking role in a film. I'm just so full of happy my chest might explode revealing a cuddly Xenomorph chest-burster that tap dances while singing a ballad about John Hurt.

6abc.com: What's the best thing about being a part of Wizard World?

Chris: The best thing? Look at you asking the tough questions. Wow, it's got to be the combination of everything. Meeting other artists, meeting the fans. Sometimes the celebrities come through Artist Alley and stop and chat. Last year Scott Wilson, Herschel on The Walking Dead, came by the table and chuckled at my Walking Dead parody print. When I met Patrick Stewart in 2010 and 2012, we talked about the comic series Transmetropolitan for a while. Held up his autograph line for a bit when that happened (laughs). He was awesome. I know I sound like a hippie when I say it, but the energy is great. This year we're next to Bob Camp; he animated my childhood.

6abc.com: Which is your favorite comic book/writer/artist?

Chris: I love the writing of Neil Gaiman, Warren Ellis, Alan Moore, Garth Ennis. Basically, if the story is good I'm going to read it. Lately, I've been collecting Darth Vader, Invader Zim, and Fight Club 2. My favorite comic characters are Wolverine, Lobo from the 1990's, Batman - the first comic I read was 'The Killing Joke' and I still have that first printing in near mint condition after 30 years, Deadpool. I could go on for days. Bill Watterson has always been a huge inspiration for me. I think 'Calvin and Hobbes' is the reason why I'm doing 'Cowboys and Robitussin.'

6abc.com: What other artists are you looking forward to meet at Wizard World?

Chris: Bob Camp!!! (Laughs) Seriously though, these artists are great! I kind of want to meet them all, like Artist Pokémon.

6abc.com: Any celebs you are looking to meet?

Chris: All of them?? (Laughs) I'd like to be able to give the celebrities I have prints of the prints for themselves. So: Tom Hiddelston, Chris Evans, Chris Hemsworth, Michael J. Fox, Lea Thompson, Christopher Lloyd. I'd like to meet Dominic Cooper so we can talk about Preacher, another of my favorite comics. So anyone I can meet that'd be great. 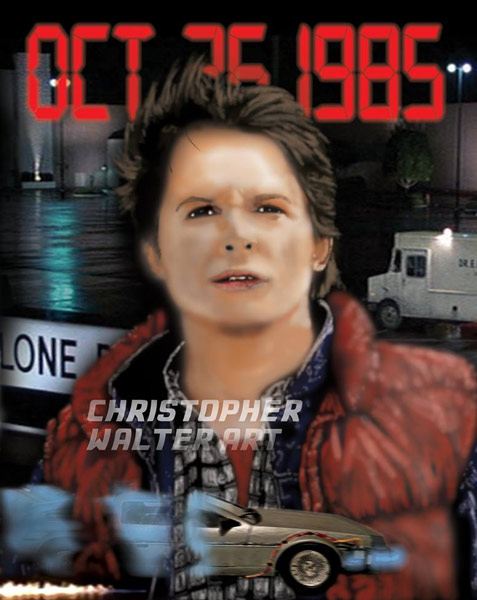 6abc.com: Any advice to those wanting to get into the comic book business?

Chris: Don't stop believin'...It's not just a catchy Journey tune. It's easy to get discouraged seeing all of these established artists around you, but learn from them. Draw inspiration from what you see, don't compare yourself to them because you're not them and they're not you. Keep up the great work and the great work will become amazing.

6abc.com: Thanks, Chris. Anything else you would like us to know?

Chris: We will be posting comic strips every day of the con at Facebook.com/CowboysandRobitussin. Warning: some comics are rated R for language and such. Commissions are always welcome and we can't wait to see everyone here!

You can find Chris at Booth B-11 in Artist Alley.