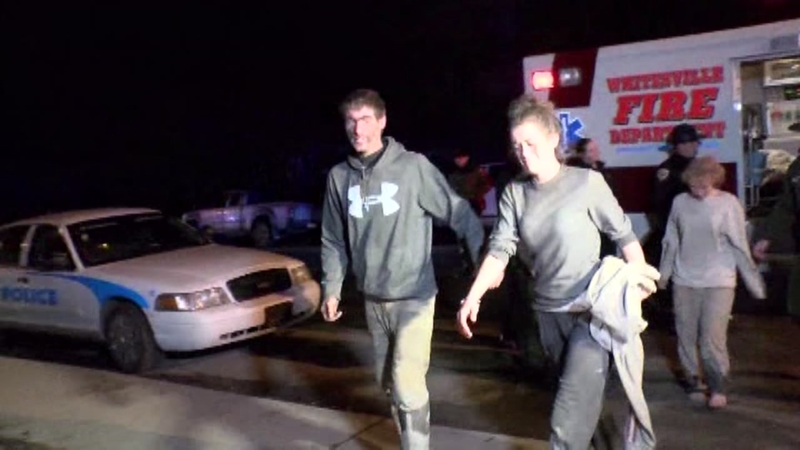 CLEAR CREEK, West Virginia -- Three people who were trapped in an abandoned coal mine in West Virginia since Saturday have been found, according to the West Virginia Office of Miners' Health Safety and Training.

After getting all three people out of the mine safely, they were brought to their family and friends. After the reunion they were taken to the hospital to be checked out.

"It's a Christmas blessing, that's all there is to it," West Virginia Governor Jim Justice told reporters.

The first person was found around 6 p.m. Wednesday, according to a representative from the Office of Miners Health Safety and Training. About 30 minutes later, the other two were rescued about 1,000 feet away from the first, officials said.

"We go into these events not to recover, we go to rescue," said Eugene White, director for the Office of Miners Health Safety and Training.

The fourth person from the group -- Eddie Williams, 43 -- was able to escape from the mine on Monday evening. Williams told authorities Kayla Williams, 25, Erica Treadway, 31, and Cody Beverly, 21, were still inside, according to a statement from the Raleigh County Sheriff's Office, and was able to give some details about their locations.

Kayla Williams was seen crying and hugging family members, saying "Thank you" before getting into an ambulance. Beverly, when asked what it was like in the mine, responded, "It was terrible," to laughs as he got into an awaiting ambulance as well.

"I just come and said they got them, all three. They're scuffed up a little bit," Randy Williams, Kayla's father, said. "They'll be transporting them, my guess, to the hospital. That's all I know, but they're OK. That's all I want to hear -- that they're alive and they're out."

White said he is now focused on the rescue team who found the three stuck in the mine: "I'd love to be up there hugging them," he said.

A total of four people were reported missing Saturday after their abandoned ATV was found near the entrance to the Rock House Powelltown coal mine, in Clear Creek, according to West Virginia Gov. Jim Justice.

"So thankful for this great group of people and the community I live in," Beverly's grandfather Greg Scarbro said. "I've lived all over the United States. I'd rather live here than anywhere. It's a great place to live."

Rescue teams from the Office of Miners' Health and Safety and numerous other state and local agencies had been searching for the missing trio since the weekend.

"I was trying to figure out how I was going to bury my grandson," Scarbro said. "I'm telling you the truth ... but thanks be unto God, he came through."

On Tuesday evening, MHS&T and other authorities were able to enter through the Rock Creek portal of the mine and add large fans to move fresh air, and to install water pumps to help clear the standing water in the cave.

Raleigh County Sheriff's Office Lt. M.A. McCray told ABC News that the individuals did not enter at the main entrance, but rather used what's called a "punch out hole" - a small shaft either accidentally punched out of the side of a mountain or created for ventilation.

Officials have said that the group went into the cave in search of copper wire -- a lucrative commodity in a financially-depressed region of the state.

No coal has been extracted from the mine for two years, officials said.

The rescue teams were unable to locate the three people on Monday and expanded their search on Tuesday, progressing more than 4,000 feet into the mine before locating the missing three on Wednesday evening, officials said.

There is a pending criminal investigation into the group's activities upon entering the mine, officials said.

"I know a lot of people thought that it was moving too slow, but they have to go to protocol," Randy Williams said. "I was getting aggravated too, because my girl was in there and I felt like if it was their's they'd make it a little more rushed, but I understand. I knew there was gonna be water on the creekside, but they did it, that's all that matters to me. They always told us, "Get it done," well they got it done, and that's all I care."