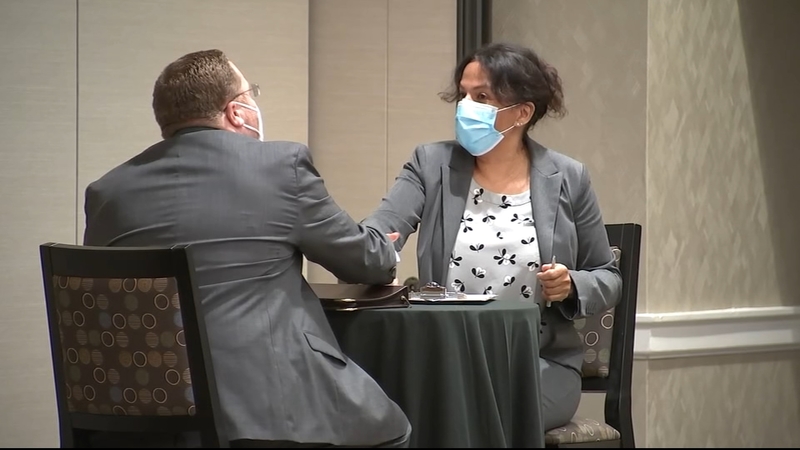 Philadelphia hotel and restaurant industries prepare for return of workforce

PHILADELPHIA (WPVI) -- A handful of hopeful people walked inside the Valley Forge Casino Resort Thursday with the odds stacked heavily in their favor.

Not for gambling, but rather a good-paying job.

Forty positions, with a handful of jobs in each of them, were up for grabs during this job fair aimed at rebuilding a workforce heavily impacted by the pandemic.

"We took time to take pictures of our employees in those roles so we can see what the uniforms look like," Mancino pointed out.

RELATED: 5,000 Wawa positions to be filled during spring season

Also holding a job fair on Thursday - a "hirepooloza" to be exact - was iconic Philadelphia eatery Chickie's and Pete's.

"We want people who want to work," said General Manager Sean McGranaghan. "We're trying to increase our workforce in order to accommodate our guests as best as possible," he added.

Taking advantage of the event, which included free signature Crabfries after the interview - not to mention a $200 sign-on bonus - was 20-year-old Alaya Wilson.

"It's easier to find a job now," Wilson said.

The Action News data journalism team found between February and March of this year more than 200,000 people were unemployed in the Philadelphia-Camden-Wilmington metro area.

Before the pandemic, those numbers were around less than 160,000 people.

"The industry went through two rounds of layoffs and that was so hard," said restaurant owner Nicole Marquis.

Marquis has committed to a $15 minimum wage for employees at her numerous Center City restaurants, including HipCityVeg and Bar Bombon.

"We're really able to focus even more on offering careers, rather than just jobs," Marquis said.

Also trying to fill jobs as the city opens up are hotels.

But unlike restaurants, they aren't bringing staff back just yet, at least not until the city completely reopens.