Driver charged in violent crash that killed 2 boys, 7 and 9, in Juniata 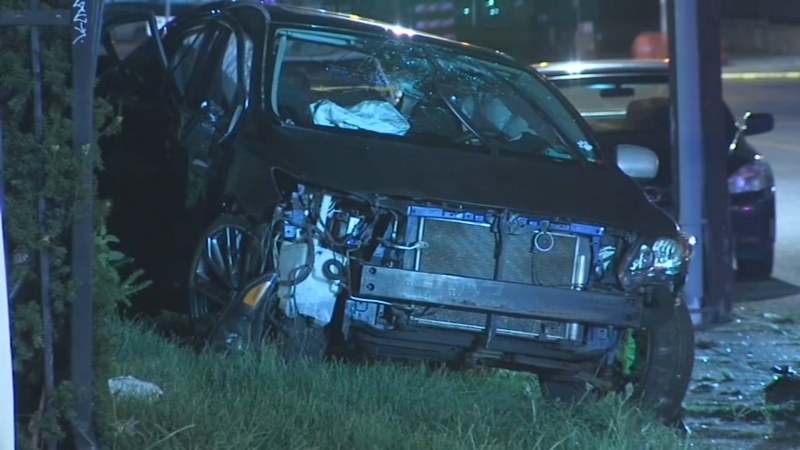 Driver charged in violent crash that killed 2 boys, 7 and 10, in Juniata

It happened just before 1 a.m. on Hunting Park Avenue near Kensington Avenue.

Officials said a family was driving east on Hunting Park Avenue when two men in a BMW crashed into them at Kensington Avenue.

According to authorities, the impact of the crash sent the family's Toyota Corolla careening off the street and the two boys were thrown from the car.

A woman who lives at the intersection told Action News she heard the crash and ran outside to help the mother.

"She was in the car, she got out we tried to help her but she said my kids and just threw herself forward, she passed out," said Shirley Davila of Juniata.

A neighbor's surveillance camera captured the scene as medics arrived at the scene and transported members of the family to the hospital.

Police said the father suffered facial lacerations in the crash. Officials said he refused treatment at the scene to accompany his children to the hospital. The boys were taken to St. Christopher's Hospital where they were pronounced dead.

The mother was taken to Albert Einstein Medical Center where she is in stable condition. Officials said she fractured her spine in the crash.

Late Sunday morning neighbors could be seen placing candles and hanging a teddy bear at the scene. They said the family lived in the neighborhood. They also told Action News that speeding drivers are a reoccurring problem in the area.

"We see it every single day people driving through this pole because they want to beat the light here just to get to another red light," said Michael Paul.

Residents said they want the city to put up speed bumps and red light cameras.

"The accidents we saw around here, it's ridiculous. It doesn't make any sense. It's people's lives and these people try to race these lights. Put some speed bumps out there," said Regginald Glover.

Davila said, " Two kids are dead. Now are you going to get involved? Now you're going to give us what we need if you don't want it to be your kids next."

Police said the driver of the striking car made a U-turn and attempted to drive off, but stopped the car about 50 feet away and then jumped out along with the passenger and ran off.

Investigators said the pair was caught about a mile away at Frankford Avenue and Unity Street.