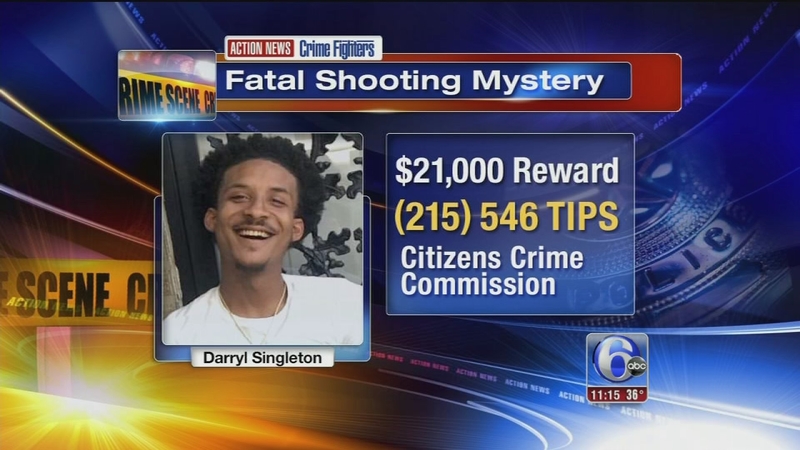 COBBS CREEK (WPVI) -- A grieving mother and father are reaching out to their community for answers about their son's killer.

Twenty-five-year-old Darryl Singleton was going to school to become an EMT, something his mother, Trina, says he took very seriously.

"He was very dedicated to school and he did very well," said Trina Singleton, mother.

That's why Trina found it odd when he told her he wasn't going to class on Tuesday, Sept. 13.

"He said that his teacher wasn't going to be at school, so I don't know if they were or not, but he did not go to class that night," said Trina Singleton.

She says around 7 p.m., Darryl was at his house along the 5800 block of Hoffman Street in Philadelphia's Cobbs Creek section.

When they arrived, they found Darryl suffering from gunshot wounds to the head and torso.

"I feel like he was setup," said Trina Singleton.

Darryl's father believes a previous run in back in June may have contributed to his murder.

"He was around Fernwood Street and some guys around there they robbed him, you know, that's where I think everything began," said Isaac Singleton, father.

The Citizens Crime Commission is administering a $1,000 reward, and the City of Philadelphia is offering up to $20,000 for the arrest and conviction of the person responsible.

Anonymous tips can be submitted by calling 215-546-TIPS.

"I hope it would lead to someone speaking up because if they can do it to him, they can do it to anybody," said Isaac Singleton.
Related topics:
philadelphia newscrime fightersshooting
Copyright © 2021 WPVI-TV. All Rights Reserved.
TOP STORIES
Man killed by stray bullet while eating Thanksgiving dinner: DA
76ers' Tyrese Maxey surprises Philly students with gift cards
New omicron variant stokes world fears, triggers travel bans
2021 is now the deadliest year in Philly since 1990
Families enjoy Black Friday shopping, holiday ceremonies across region
Musical theater master Stephen Sondheim dies at 91
Woman found dead in Chester fire
Show More
Person of interest arrested in connection with South Philly murder
Missing gun belonging to Laundrie's parents wasn't made public
Local deals you can't miss this Black Friday
Here's why you should get your Christmas tree early this year
Stocks fall sharply on new COVID variant; Dow has worst day of year
More TOP STORIES News