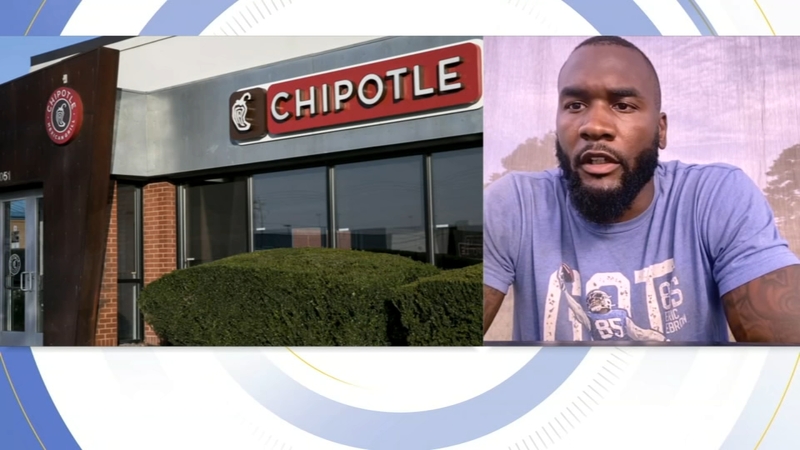 Chipotle is apologizing after NFL linebacker Darius Leonard says he was a victim of discrimination when he was told to leave a restaurant in Florence, South Carolina.

According to Leonard, his group was finishing up their meal when they were asked to leave by the manager.

In an Instagram post Thursday, the Indianapolis Colts player said he was with three other Black men and a biracial woman. He said they were finishing up their meal when the manager approached them. The manager said a white customer allegedly felt threatened.

Leonard said he and his group had no interactions with the customer.

"A white guy said that we were verbally abusing him, talking trash to him. and, you know, it was basically a lie," Leonard said.

The manager of the Chipotle then said they were going to call the police.

He added, "You know, it's crazy that you have to think like that now when, you know, something of that nature, something -- the police or anything getting involved with an African-American is very scary, just to even sit down and think about leaving your house and making it back in one piece."

Leonard told GMA this was an act of discrimination and racism.

"Without a doubt. It was a group of African-Americans sitting there, absolutely didn't say nothing to anyone that was outside, and for us to just -- come up with the manager, the way he came, his tone, his demeanor and everything. We felt like we were very disrespected, and he was like, 'the white guy said that y'all verbally abused him.' We knew we didn't say not one word to the guy. We didn't even look at the guy. We felt like that we were definitely racially profiled and very disrespected," Leonard said.

"We have a zero tolerance policy for discrimination of any kind...I've personally reached out to Darius and I'm committed to ensuring the appropriate action is taken once the investigation concludes."

Leonard recapped his conversation with Nichol to GMA. The NFL star told Nichol, who has three children, to speak to him as a father, not a CEO.

The NFL star continued, "He basically said, 'what you went through was a horrible thing.' It sucks talking to the CEO because the only thing he was basically doing was apologizing because he had to and I'm like, 'yo, I don't just want an apology.' I want a step in the right direction to show that Chipotle is not a racist organization. I want to see more diverse things in the community, stuff like that, something that can show that we're taking this step in the right direction."

For weeks now, millions have marched in protest around the country for the end of racism and police brutality following the death of George Floyd.

"That's what being Black in America is right now," Leonard said in the Instagram video. "Us not even doing anything wrong, going out to eat with your family, just trying to spend a little bit of quality time. You can't even enjoy eating anymore."

The Colts released a statement to show support for Leonard: