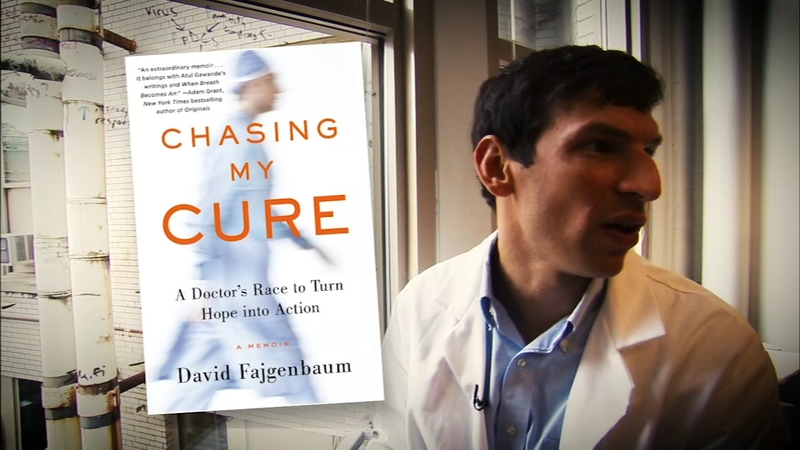 Brought to the brink of death five times, a local doctor is now spearheading the international search for the cure for his own rare disease. And it's happening right here in Philadelphia.

His book has now hit store shelves. It's called Chasing My Cure, a tale. Dr. David Fajgenbaum says is about getting up and fighting back after life knocks us down.

"I got really, really sick," Dr. Fajgenbaum recalls. "So sick that I was admitted to the intensive care unit. I actually had my last rites read to me because the doctors didn't think I was going to survive."

Then a 25-year-old, third-year medical student at the University of Pennsylvania, Dr. Fajgenbaum was the picture of health. He was the quarterback during his undergraduate years at the Georgetown University and could bench press 400 pounds. But, in a blink, it all changed.

"Doctors said, David, 'Your liver, your kidneys, your bone marrow are shutting down,'" Dr. Fajgenbaum remembers. "We have to hospitalize you."

"Castleman is about as common as ALS," he explains. "It affects people of all ages and one third of people with my sub-type die within 5 years of diagnosis."

The cause, and the cure, remain a mystery.

"It's kind of in between a cancer and an autoimmune disease," Dr. Fajgenbaum says.

That time, chemotherapy worked, but David would go on to relapse four more times.

"You learn a lot about life from nearly dying and I want to share those lessons with other people," he says.

His book is called Chasing My Cure, because he has dedicated his life to finding it. That work is being done with a team of doctors and researchers at the labs on the campus of the University of Pennsylvania, his alma mater.

Dr. Fajgenbaum designed his own experimental treatment course, and so far, it's working. He's been in remission for five and a half years. He calls himself "Patient Number 1."

"I don't know if this disease will come back tomorrow or the next day," he says," but I live with this incredible sense of gratitude."

"Knowing that he trusts taking it for himself and knowing his battle has been so difficult and and he feels comfortable doing it, it wasn't even a question for us," explains Katie's mom, Mileva.

Diagnosed nearly 6 years ago, Katie too is now thriving.

"She's in ballet and just had her first dance recital," Mileva says with a smile, "and she's riding a bike and she's in school."

David is now 34 years old, and a father to one-year-old Amelia with his wife Caitlin, who has been by his side since they started dating in college.

"I didn't care that he was sick," Caitlin explains. "I just wanted to be with him, no matter how much time we had."

As a family, they say each day is a gift.

"I feel that I am in overtime," he explains, "I can almost hear the clock ticking. The truth is that we are all in overtime. None of us knows the time that we have, so we need to make the most of every second."
Report a correction or typo
Copyright © 2022 WPVI-TV. All Rights Reserved.
TOP STORIES
17-year-old student fatally shot near Southwest Philly high school
AccuWeather: Biting cold overnight, then tracking a Nor'easter
Supreme Court Justice Stephen Breyer to retire
Eagles' Brandon Brooks announces his retirement
Man charged with murder after aunt found dead in Bucks County park
Fed plans to raise rates as soon as March to cool inflation
NJ man wanted for fatal Wawa shooting arrested in NY
Show More
Officer dragged half a mile during Philadelphia traffic stop
CHOP KOP: New pediatric hospital now open
What to know about tensions between Russia, Ukraine
Parents share story of infant's day care abuse to help others
Remembering Kobe Bryant 2 years after his death
More TOP STORIES News