Moderate to major tidal flooding is possible for areas along the Delaware River, officials said.
WPVI
By Dann Cuellar 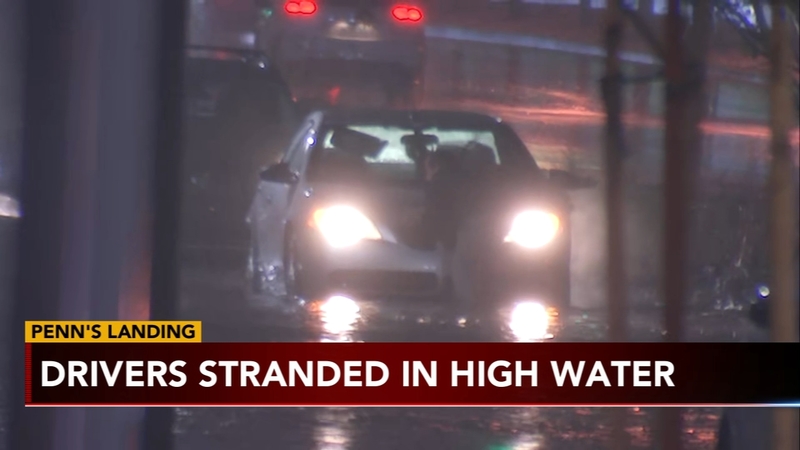 PHILADELPHIA (WPVI) -- The I-95 exit at Washington Avenue was closed Friday night due to flooding, Philadelphia officials said.

Flooding from the Delaware River also left parts of Penn's Landing under water and drivers stranded in the floodwaters.

Motorists being caught by surprise by flooding on Columbus Blvd from Lehigh to Washington due to tidal flooding. Police urging motorists to avoid the area. @6abc pic.twitter.com/opZ6Zmvriv

Officials said the flooding was mainly on Columbus Boulevard from Lehigh to Washington avenues. Police urged motorists to avoid the area.

"Don't drive past barricades," said Brad Rudolph, a spokesperson for PennDOT. "We saw a lot with Ida, if we closed bridges or roadways people would just drive around them. It's a very dangerous situation and ties up emergency personnel... they have to make rescues. The best thing you can do is to sit out during the storm."

PennDOT officials will be working with police as well as emergency management crews throughout the night. Rudolph said if there's an issue they say they will close roads.

"Unfortunately there's not a lot we can do with this amount of rain," said Rudolph. "Much like we saw with Ida, sometimes it just overwhelms the system. You got to wait for these waters to recede. I expect to see a similar situation where we start to see the rivers kind of crest and then fall back and we can assess the damage."