Diego Castellanos retired from 6abc in September of 2018.
WPVI
By 6abc Digital Staff 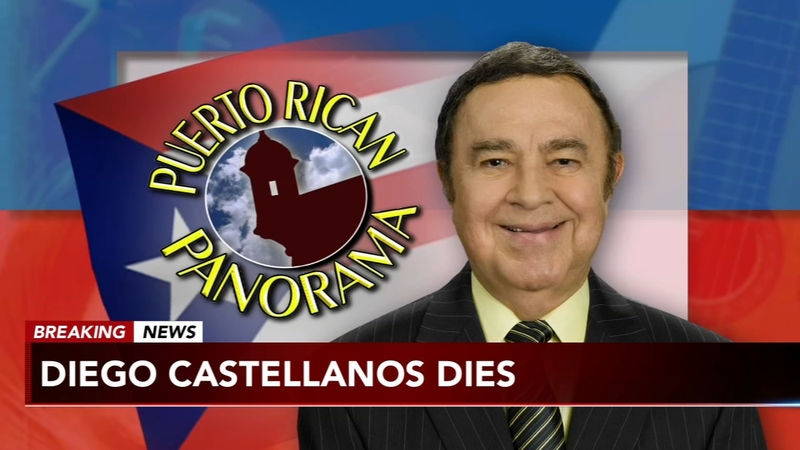 PHILADELPHIA (WPVI) -- Funeral arrangements have been announced for Diego Castellanos, a former 6abc employee and the longtime host of Puerto Rican Panorama.

Castellanos passed away over the weekend. He was 88 years old.

Relatives and friends are invited to pay their respects on Thursday, May 5 from 10 a.m. to 12 p.m. at the Bradley & Stow Funeral Home located on Medford Mt. Holly Road in Medford, NJ., followed by a service at noon.

Castellanos was a leading voice for the Hispanic community in Philadelphia and beyond. For nearly 50 years he hosted a program that addressed the needs of his growing community.

"He always saw it as his mission to shed light on what we Puerto Ricans in Philly and the Delaware Valley were all about," said former Action News photographer Lou Lozado.

He called Castellanos a renaissance man.

"Not many people know that he was a pilot. He was an academician with a PhD degree. He was a musician. He was a father and a husband," said Lozado.

Castellanos' daughter, Felicia, said her father's impact, particularly on the Puerto Rican community, was massive. She said he is the reason she is so proud of her heritage.

"I think being proud to be Hispanic and be Puerto Rican...you didn't see it as much back then," said Felicia.

Action News spoke with Felicia on her father's former set of Puerto Rican Panorama. The set was home to countless celebrities and dignitaries, giving an all too important voice to the Hispanic community.

"It's overwhelming," said Felicia. "It's incredible because my dad loved his show and I think he would be amazed to see you guys have kept everything."

Castellanos was honored with an induction into the Broadcast Pioneers of Philadelphia Hall of Fame in 2002.