Pa. for Trump: How Pennsylvania went red for 1st time in 28 years 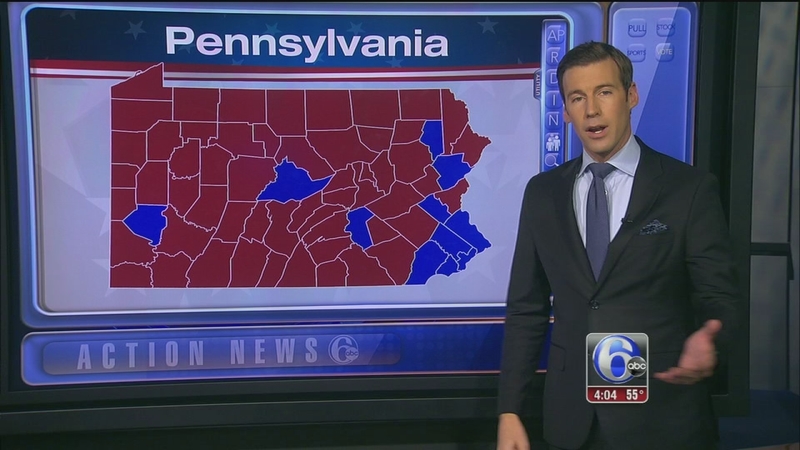 PHILADELPHIA (WPVI) -- House Speaker Paul Ryan called the election of Donald Trump to the presidency the most incredible political feat of his life.

When you look at the electoral map, it's hard to disagree.

As of Wednesday evening there were still a couple of states that had not yet been called, but it's clear Donald Trump made his march up the East Coast by winning Florida and North Carolina.

That march then met Hillary Clinton's 'blue wall' states which, at one time, included Pennsylvania.

But Pennsylvania is now red.

The question is: How did this happen in the state of Pennsylvania?

Trump flipped three counties that were blue in the last election: Erie, Luzerne, and Northampton.

He also gained ground in the center part of the state.

Hillary Clinton automatically had quite a bit of work to do to gain that ground, which is why she spent so much time campaigning in Philadelphia and the suburbs to drive up the vote totals.

Yes, she did flip Chester County, which was for Mitt Romney four years ago.

But she lost ground in Philadelphia County.

She held where Barack Obama was four years ago, but Trump did better than Romney did.

It was also a nearly dead tie in Bucks County, where Clinton needed to do well.

The other Philadelphia suburbs did go Clinton's way.

But go a bit farther out and it was win after win for Trump.

When you look at the facts that Trump flipped three counties and did a whole lot better in the middle of the state - while Clinton lost ground in the all-important Philadelphia area - you can see how it just did not add up for the Democratic nominee on Tuesday.