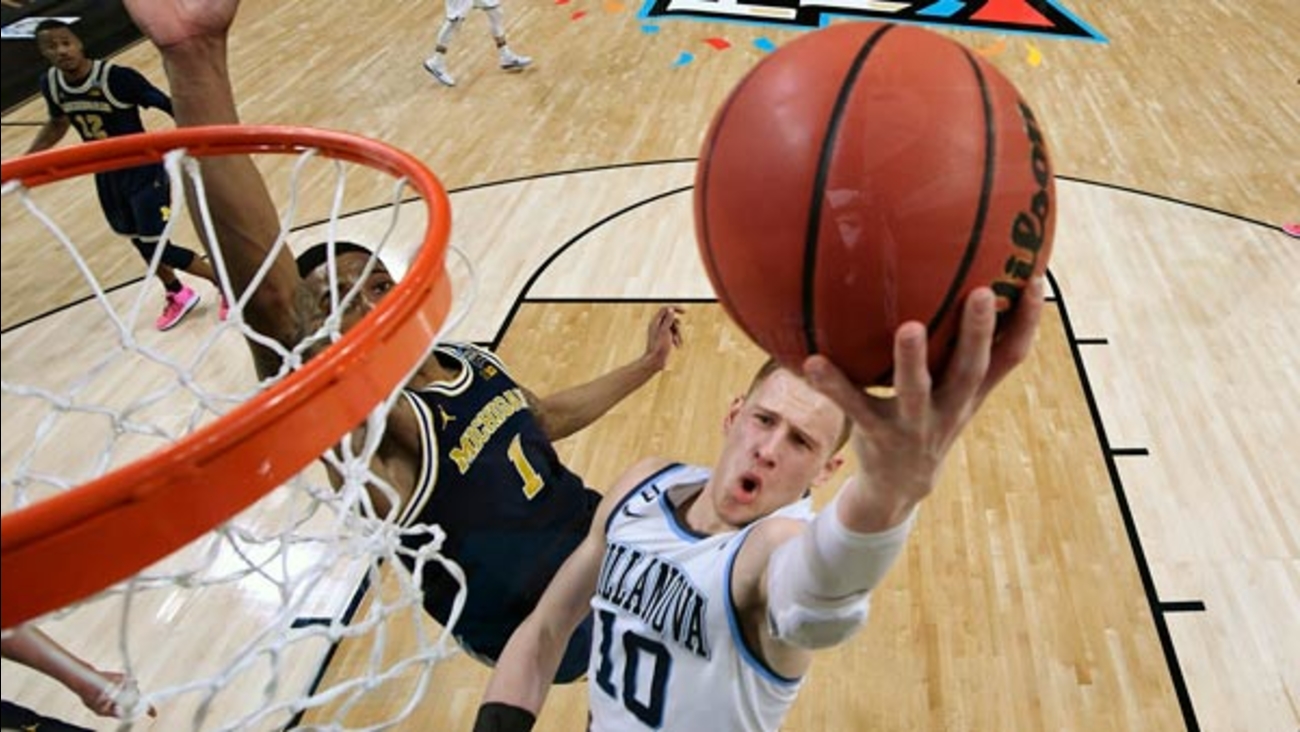 Villanova's Donte DiVincenzo (10) goes up for a shot past Michigan's Charles Matthews (1) during the second half in the championship game. (AP Photo/Chris Steppig, NCAA Photos Pool)

He was the breakout star of the National Champion Villanova Wildcats and now Donte DiVincenzo has his sights set on the NBA.

The man dubbed 'The Michael Jordan of Delaware' and the 'Big Ragu' will enter his name into the 2018 NBA Draft process, but will not hire an agent, Villanova Men's Basketball announced Thursday morning.

The team also said juniors Phil Booth and Eric Paschall will return to the Wildcats for their final season of eligibility in 2018-19.

#Villanova Final Four MVP Donte DiVincenzo will ENTER the 2018 NBA Draft Process but will NOT hire an agent giving him the opportunity to go back to Villanova @6abc pic.twitter.com/PCu2fekA5Z

Not hiring an agent will keep DiVincenzo eligible to return for his third season with the Wildcats.

The Big Ragu scored 31 points in 'Nova's 79-62 win over Michigan for the championship.

Prior to attending Villanova, DiVincenzo graduated from Salesianum School, a Catholic high school for boys in Wilmington.

"Donte has consistently improved in his time at Villanova through dedication and a commitment to our core values," stated Wildcats head coach Jay Wright. "His play this season has created a unique opportunity for him to receive feedback from NBA teams in the draft process. We support Donte fully and our staff will work together with him and his family to help him assess the next step in his basketball career."

"Honestly, when I got into the game, all I was trying to do was play hard," DiVincenzo said after the championship victory. "I just wanted to help my team offensively."

Senior Mikal Bridges has also declared for the NBA Draft. He announced his decision on ESPN's Get Up program last week.

In a letter for ESPN.com, junior guard and NCAA player of the year Jalen Brunson declared his NBA intentions.

""After careful consideration and prayer, I have decided to enter the June NBA draft and hire an agent," Brunson wrote in an essay for ESPN.com.

Like DiVincenzo, it was previously announced Omari Spellman will enter the draft process without hiring an agent, as well.