According to many, the late Paul "Earthquake" Moore was Southwest Philadelphia.
WPVI
By Bob Brooks 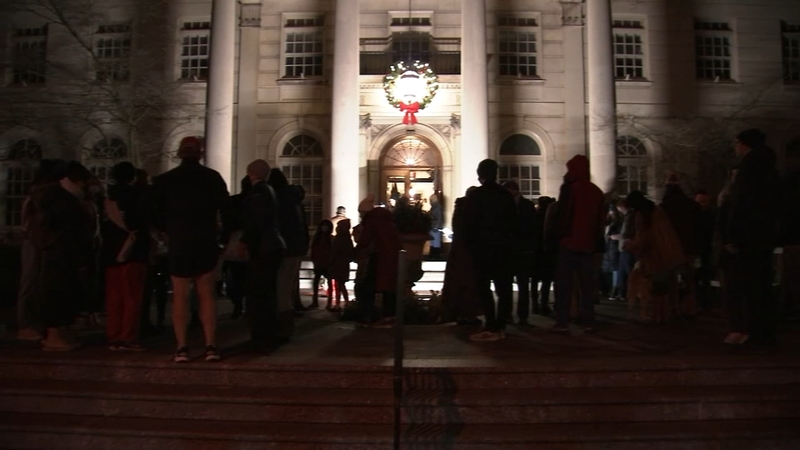 In Southwest Philadelphia, the annual Peace March honored Dr. King. But it was also for another man who embodied Dr. King's fight for equality.

According to many, the late Paul "Earthquake" Moore was Southwest Philadelphia.

"I knew him for over 25 years. He was a great mentor for me," said Philadelphia Police Officer Arnold Mitchell.

"This community is really empty without him, but we're pressing forward and trying to move on," said activist Tyrice Harrison.

The march began at the 12th Police District Headquarters where Moore served as chaplain.

Then down Woodland Avenue to Moore's former church which is now located on Paul Earthquake Moore Way.

His family says they will continue the fight that Dr. King started and that Moore continued.

"Just continue doing the things that he did for the community and let everyone know we're still here and his legacy lives," said his daughter Paulette Moore.

The late activist and reverend was also a former boxer who frequently used the sport as a way to mentor those at risk of violence.

"To be out here though he's not with us, it means that everything Earthquake fought for, peace in our streets of Southwest Philly, we're carrying on his legacy," said Pennsylvania State Representative Joanna McClinton.

Meanwhile, in Haddonfield, they also celebrated Dr. King and the fight for equality.

Outside of Borough Hall, a poem was read by the local Girl Scouts.

A performance of "Hallelujah" was sung by the Haddonfield Memorial High School CoEd, an a cappella group.

Then there was a march down Kings Highway.

"Dr. Martin Luther King Jr. was a very brave individual. He fought for what he believed in and he did it the way he wanted," said Girl Scout Paige Fitzpatrick.

"Whether you can do something big or small, help out your neighbor, help out your friends. Just be a kind person like he would want you to be," said CoEd member Erica Watts.
Report a correction or typo
Related topics:
community & eventsphiladelphiamlk daymartin luther king jr
Copyright © 2022 WPVI-TV. All Rights Reserved.
MLK DAY
Communities across the region participate in MLK Day of Service
Organization continues MLK's legacy of economic empowerment
Philly holds Martin Luther King Day of Service event
How to celebrate, get active for MLK Weekend, Day of Service
TOP STORIES
AccuWeather: Severe Thunderstorms This Evening
Teen, officer and driver injured after police chase ends in crash
'American Idol' finalists gear up for last performances in finale
Texas woman sought in fatal shooting of pro cyclist: US Marshals
Something strange is happening with our universe: NASA
78,000 pounds of infant formula arrives in US
12 shot and 4 dead after string of shootings in Philadelphia
Show More
Fate of 2,500 Ukrainian POWs from steel plant stirs concern
Pennsylvania's Fetterman released from hospital after stroke
Some peanut butter recalled for potential salmonella
Biden pushes economic, security aims as he ends South Korea visit
South Jersey Army Navy shop sends uniforms to Ukraine
More TOP STORIES News