The medic told investigators he and the nurse were out of their seats attending to the infant when they heard a loud "bang."
WPVI
By 6abc Digital Staff and Bob Brooks 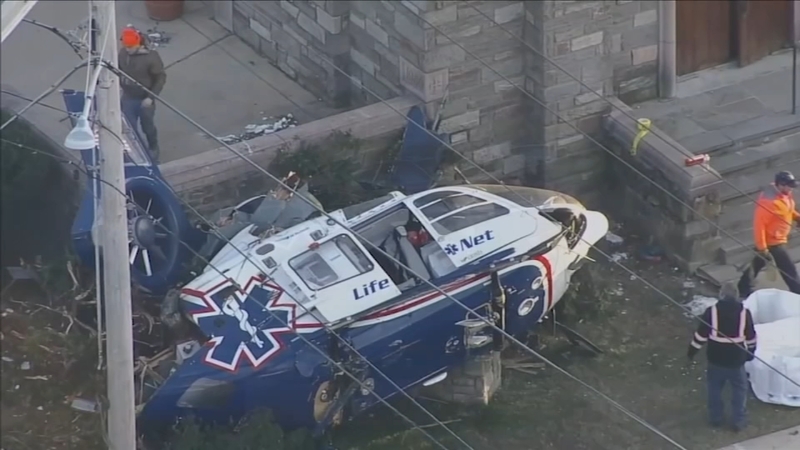 DREXEL HILL, Pennsylvania (WPVI) -- The National Transportation Safety Board has released a preliminary report on the medical helicopter crash in Drexel Hill on January 11.

The pilot, Danial Moore, was seriously injured. A nurse, medic, and a 2-month-old patient were not injured.

The medic told investigators he and the nurse were out of their seats attending to the infant when they heard a loud "bang."

The helicopter then rolled multiple times in flight. He and the nurse were pinned to the ceiling of the aircraft and internal communication was lost, the report said.

Somehow, they secured the baby and braced for impact.

A witness who described himself as an aviation enthusiast was reportedly directly underneath the chopper's flight path and noticed it was "very low and louder than normal" and that the "tone" of the rotors was unfamiliar, according to the report.

A second witness said that he saw a helicopter "very low...very loud...banked right and left out of control, then appeared to straighten..." before it disappeared from view.

"Experience and training and professionalism, this crew exhibited that in spades. I mean, an absolutely phenomenal job," said John Gagliano who is a former Navy pilot. He holds the FAA's highest pilot rating.

Gagliano says the preliminary report also sheds light as to what went wrong.

"The preliminary report tells us some things we can rule out, for example, engine failure," said Gagliano.

He believes there was some type of control or mechanical malfunction, given the way the chopper was moving so out of control.

It could have been the tail rotor.

There may have also been a main rotor issue.

"Each of the blades on the main rotor that spins on top can move independently. If one of those is moving in a way that is not in sync with the others, that's going to cause controllability problems in the helicopter," said Gagliano.

Moore, a pilot of 27 years, avoided a church, power lines and people as he crash-landed.

He was the only one seriously injured with fractured ribs, sternum, and vertebrae, among other injuries.

"I had God as my co-pilot that day," said Moore as he was released from the hospital earlier this month.

He says his memory is in pieces. He remembers his medic taking the 2-month-old infant to safety and his flight nurse dragging him away from the burning helicopter.

A final NTSB report typically takes about a year to complete.