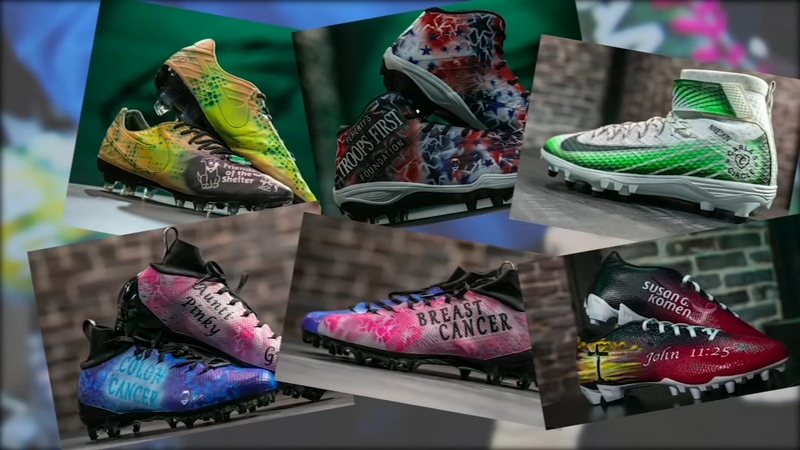 PHILADELPHIA (WPVI) -- When the Eagles lace them up and step onto the field Monday night against New York they will be making a giant gesture for charity.

Eagles players will sport custom cleats to raise awareness for causes that hit close to home.

Eagles rookie Shareef Miller had his designed to honor his late brother and to raise awareness for gun violence which took his life.

Eagles rookie Shareef Miller had his designed to honor his late brother & to raise awareness for gun violence which took his life@6abc@Sacks5thReef#NFL#Eagles pic.twitter.com/eCRIOXt18P

"I want raise awareness to end gun violence," says Miller who is not the only Eagle honoring a lost loved one.

Running back Jordan Howard lost his father when he was 12 years old to a form of lung disease, pulmonary fibrosis-- a cause that he has been bringing attention to since he came into the NFL with the Chicago Bears.

Players are raising awareness and money. You can feel like what it's like to walk in their shoes, Eagles players and others around the league will auction off their cleats on NFL.com Fans can buy them and 100% of the proceeds will go to the players' charitable causes of choice.

"This is bigger than football," said kicker Jake Elliott who will wear specialty cleats to bring attention to a local animal shelter.

The cause extends beyond the players. In conjunction with the NFL's "My Cause My Cleats" campaign, the entire Eagles organization, from the coaching staff to front office, will wear specialty sneakers to raise awareness for autism--a cause that is near and dear to owner Jeffrey Lurie. Those cleats were hand designed by Doug Wager in Havertown of Weasel Head Custom Design.

How the specialty cleats are made locally in Havertown ⬇️@6abc@brandongraham55@cj_wentz#Eagles #FlyEaglesFly pic.twitter.com/MqfzXzSAlQ