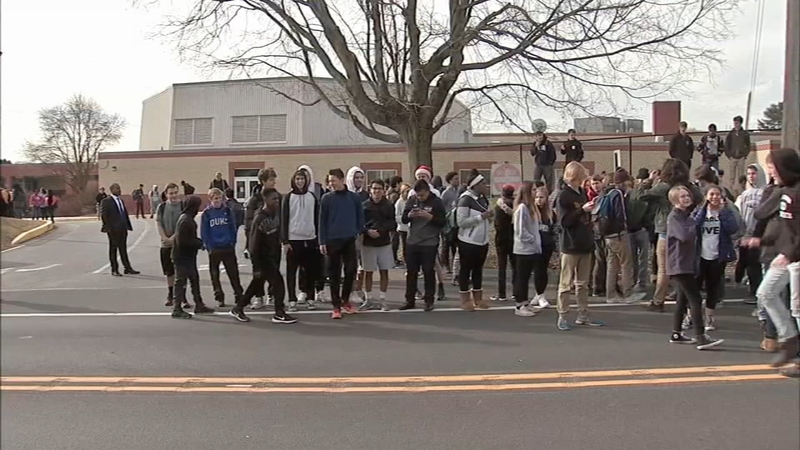 Police temporarily shut down South Providence Road after students walked out in protest against fellow students suspected of penning a disgusting hate-filled letter and also a picture of them posing as KKK members.

Hayden Soch said, "I think it's terrible I don't know why they did that but before this they seemed like relatively good people but I don't what they were doing."

An investigation is now underway by local police.

According to detectives, the letter was placed at 4 homes of minority families in the Swarthmore Borough over the weekend.

At the top it states "Dear Non-U.S. Citizens."

Then reads, "due to President Trump's election, people like yourself should leave the country by 9 a.m. the next day."

It suggests after they leave they should get jobs as prostitutes or work at McDonalds or Denny's.

But police say what's most disturbing is when the authors wrote they would "execute u and ur kidos" if those who got the letter didn't leave their homes.

"It's horrible what happened but we had a few discussions about it," said Elliot Kurz.

So far police say they suspect at least four female high school students to be the authors.

"It concerns me on so many levels because it is not at all representative of the community that is Wallingford-Swarthmore," she said. "I love the community it is inclusive and this is something I just don't understand."

On top of the physical letters, a social media post has gained momentum with the letter and students wearing those KKK masks.

Police now confirm at least one of them is a female student that's partially responsible for penning the hate-filled letter.

"I think it's disgusting. I'm actually friends with someone of them so I think it's wrong that they did that."

Police say because the authors of the letter threatened violence there could be arrests made in the near future.