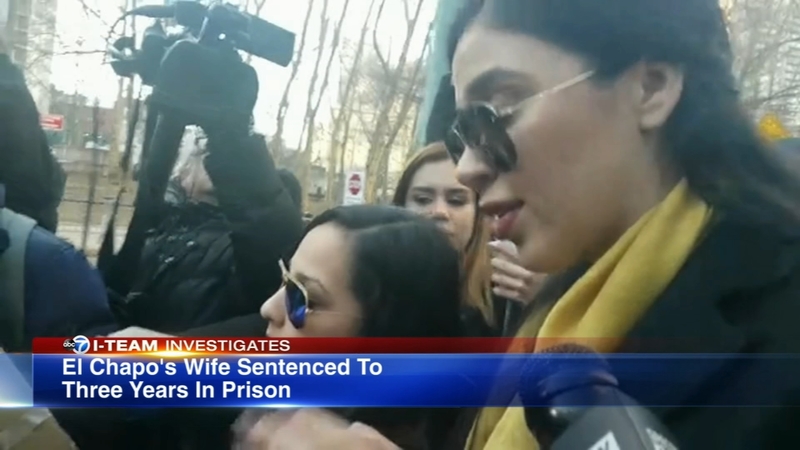 CHICAGO -- With her infamous husband already locked up for life in the U.S. super-max prison, the wife of Joaquin "El Chapo" Guzman on Tuesday was herself sentenced to three years behind bars.

Emma Coronel Aispuro, a former teenage beauty queen, had pleaded guilty to three federal counts, including conspiracy, that placed her at the heart of El Chapo's Sinaloa drug cartel in Mexico. For several decades the notorious drug lord's cartel was responsible for supplying at least 80% of all illicit drugs to metro Chicago streets, federal law enforcement officials have said. El Chapo was Chicago's Public Enemy Number One during his heyday.

Aispuro was sentenced on Tuesday by D.C. District Judge Rudolph Contreras, whose court hearing began with Aispuro being identified by case number 21-255. However, it was a number in the billions that got Aispuro into legal trouble: the billions of dollars that investigators say their family drug trafficking organization handled by the distribution of cocaine, heroin, methamphetamines and fentanyl.

The kingpin's spouse married El Chapo as a teenager. She is now 32 years old.

El Chapo is locked up for life in the U.S.; El Mencho is a fugitive in Mexico. Both of their wives are in government custody.

Prosecutor Anthony Nardozzi noted on Tuesday that El Chapo's son helped manage the cartel, and facilitate his daring tunnel escape from a Mexican prison in July of 2015. Nardozzi also said that she "passed messages" on El Chapo's behalf at the time of the prison escape-messages that described acts of violence-although she may not have been aware of the contents of the messages from her husband.

Despite the potency of the Sinaloa cartel and Aispuro's role in support of her husband, and a possible 14-year prison sentence, Nardozzi and the government recommended a sentence of four years, which was a nine-month "downward departure" from the lowest end of the federal sentencing guidelines. Prosecutors noted that she played a minimal, support role, turned herself in to U.S. authorities and pleaded guilty. She has been in custody since last February, in harsher conditions because of COVID-19 restrictions, according to Judge Contreras.

She had no criminal history and "took accountability for her actions," Nardozzi said, voluntarily forfeiting $1.5 million of personal cartel's proceeds to the government. While that judgement is not a significant amount of money compared to the huge bottom line of the Sinaloa cartel, federal authorities said that it symbolized her acceptance of responsibility for the crimes and that she has no way to pay any greater amount.

"The defendant was not an organizer, leader, boss, or other type of manager," Nardozzi told the court. "Rather, she was a cog in a very large wheel of a criminal organization."

Aispuro's defense attorney Jeffrey Lichtman reiterated that her role began when she met El Chapo as a 17-year-old and married him on her 18th birthday. Her role in the cartel was mostly to be El Chapo's wife, Lichtman said, despite her admitted role in his Mexican prison escape.

Lichtman was especially critical of reports by some news organizations last summer that Aispuro was cooperating with federal authorities in their investigation of El Chapo, which will likely make it impossible for her to ever return to Mexico. The general practice of cartel leaders in Mexico is to exterminate, many times via public beheadings or hangings, anyone who helps the government or is thought to have.

The government was saved a significant amount of time and money by Aispuro's immediate acceptance of responsibility, Lichtman said.

With the kingpin's spouse never able to speak to her husband again or see her children again, Lichtman asked for a sentence short of the government's recommended four years.

In a statement delivered in Spanish and repeated in English by a court translator, Aispuro said she had "true regret for any and all harm" and that she feels "shame" for her conduct. She said, "I am suffering" for what has happened and that she was raised to be honest but also to accept the consequences of actions. She asked Judge Contreras for forgiveness and that she hoped to teach her 9-year-old twin daughters similar mercy.

"I beg you to not allow them (her daughters) to grow up without the presence of a mother," she told the judge, after noting that the twins were also without their father.

The judge did not impose a fine, despite being able to do so under the law, because there was no indication she had an ability to pay.

He called the Tuesday sentence sufficient but not greater than necessary and noted that she played a supporting role as wife of the boss, El Chapo. Judge Contreras noted, however, that Aispuro did enjoy the fruits of a major illicit drug organization.

The judge's sentence of 36 months was even less than the government had requested.

Aispuro will also face a period of court supervision after serving the prison sentence.

The final words of wisdom to El Chapo's wife came from Judge Contreras.