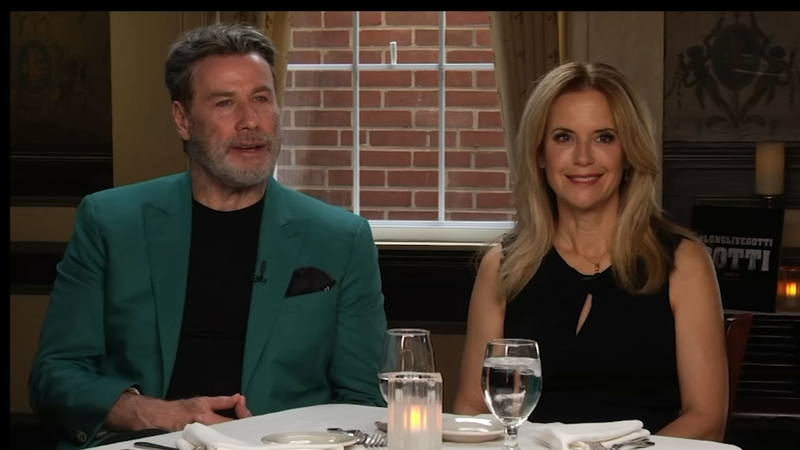 PHILADELPHIA (WPVI) -- The story of John Gotti, the infamous boss of the powerful Gambino crime family, hits theaters on June 15.

It stars John Travolta and his wife, Kelly Preston and it's a project nearly a decade in the making.

The couple sat down to talk about their new film at Dante and Luigi's in South Philadelphia.

People are fascinated with mob films, but this is a real story and these are real people and they were part of the movie-making process.

"Very much so and it was completely sanctioned by the family and they chose Johnny to play John Gotti," said Preston.

With nicknames like the Dapper Don, for his expensive taste, and Teflon Don, after three high profile cases that ended in acquittals, Travolta says Gotti was a sort of living mafia legend.

"And this is the last modern gangster you will ever see. This is really kind of it. I think of it as a bookend to 'The Godfather'," he said.

"We spent the whole day with Victoria. She cooked us lunch.....I wore her wedding ring along with a ring that John had given here that she hadn't taken off," she said.

This movie was Travolta's longtime passion project and the family let him into Gotti's world - and his closet.

"One of the coats that I wore in the beginning and the end of the film actually had still had the cologne that he had worn, so all of that adds. You're wearing his jewelry, scarves, the coat, the scent - it all allows you to arrive at becoming someone.

It's that authenticity, Travolta says, that sets this apart from any other so-called mob movie.

"It was a nice challenge. The family is excited about our interpretation," he said.

Travolta and Preston tell Action News that the family was on set for most of the filming and really had a hand in making sure their personal story was not only accurate, but a memoir to Gotti, who passed away in 2002.

Watch the interview from Alicia Vitarelli above.