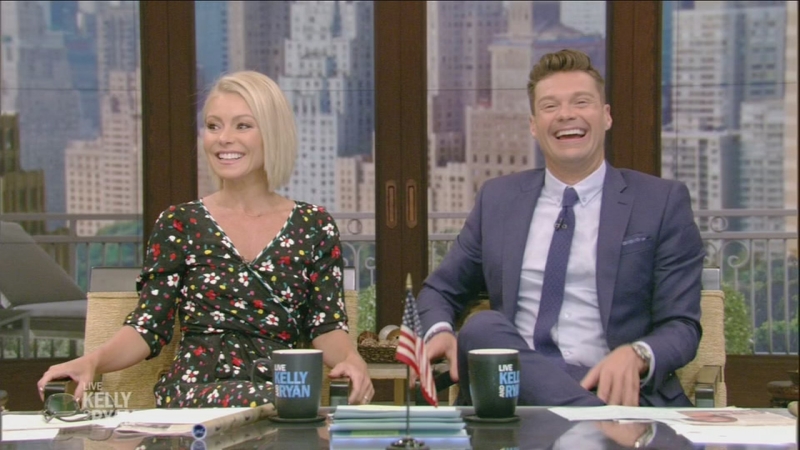 NEW YORK (WPVI) -- LIVE with Kelly and Ryan just kicked off it's first full season this week with Ripa and Seacrest at the helm.

Alicia Vitarelli had a chance to visit the co-hosts on the set. And while they may be a relatively new TV pairing, you'd hardly know it.

There's something familiar and comfortable about them.

These two TV powerhouses are taking "live" to a whole new level, even broadcasting their walk down that famous hallway on Facebook Live.

"What's interesting is when you do a live Facebook or a live Instagram or anything like that, you can take questions in real time that pop up," said Kelly.

"And one of the most compelling was 'What color nail polish is Kelly is wearing today?'," added Ryan.

Kelly and Ryan have a comfort and an ease that's contagious.

LIVE with Kelly and Ryan kicks off their first full season together - Alicia Vitarelli reports from New York during Action News at 5:30 p.m. on September 7, 2017.

The LIVE studio audience gets a lot of love, hugs, high fives and obviously - selfies!

It almost feels like you're sitting and having coffee with them in the morning and just hanging out with friends. That's probably because they are friends and have been for about 20 years, with a mutual admiration you can feel.

And what does Ryan think about Kelly? "She's so smart, so clever, so quick, so grateful and gracious," he said.

It's a paring, producers say, that was kind of perfect and obvious.

"The two of them together it's just magic because you've got 2 great broadcasters, both funny, different personalities, friendly..." said executive producer, Michael Gelman.

Quite the multitasker, Ryan can now do his radio show right there in ABC studios in New York. And next year, when resumes his role as host of American Idol, he'll be jetting to and from Los Angeles.

"I will not miss a show with her. I will fly back from the airport right on the air and wear the same suit," joked Ryan.

These two really know how to mulitask and they're even taking that whole live element beyond Facebook and beyond the air, broadcasting on Instagram after the show this week as well.

You can catch LIVE with Kelly and Ryan weekday mornings at 9 a.m. on 6abc.