Sources said there is optimism the Sixers will be able to resume play in Boston on Monday.
WPVI
By Jaclyn Lee 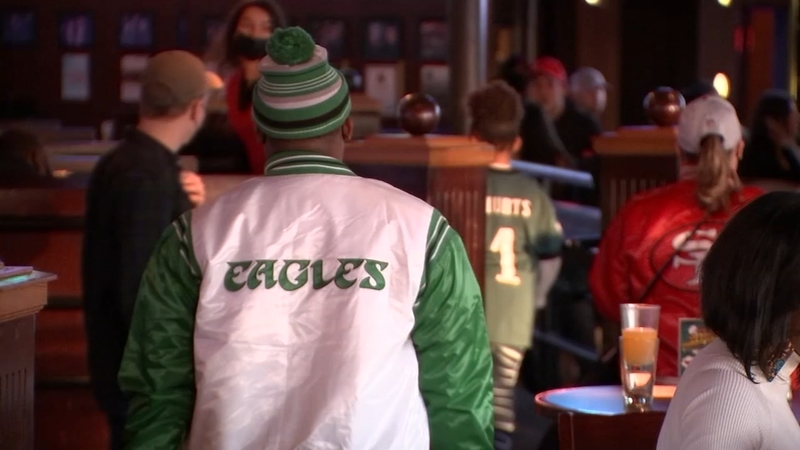 76ers, Eagles forced to postpone games due to COVID issues

PHILADELPHIA (WPVI) -- Philadelphia sports fans were forced to make last-minute changes due to a COVID-19 outbreak affecting multiple sports teams over the weekend.

The Philadelphia 76ers' struggled to find eight available players, which led to the postponement of Sunday's game against the New Orleans Pelicans.

The 76ers placed Andre Drummond and Shake Milton in the NBA's health and safety protocols Sunday, while Joel Embiid (ankle), Tyrese Maxey (quad) and Danny Green (hip) are all listed as questionable. Georges Niang was added to the protocols Wednesday.

Three games in all have been postponed Sunday, with the Cavaliers-Hawks and Nuggets-Nets contests also being called off because of COVID-19 issues. Monday's Magic-Raptors game and Tuesday's Wizards-Nets contests were also postponed.

More than 20 Washington players are unavailable due to COVID-related issues, including both the starting and backup quarterbacks.

The Philadelphia Eagles were also forced to move Sunday's game to Tuesday due to an outbreak impacting the Washington Football Team.

In a press release issued Friday afternoon, the NFL said the game would be played at 7 p.m. Tuesday at Lincoln Financial Field.

More than 20 Washington players were unavailable due to COVID-related issues, including both the starting and backup quarterbacks.

Some fans who traveled from out of town said they're disappointed to learn about the late changes.

The Eagles game was supposed to be an early Christmas present for the Kincade family.

"We leave Monday, so we can't make the game Tuesday. So that made me sad. Then I was like ok, cool, well no problem, the Sixers play. I'll buy tickets. I bought the tickets, and then today we got the news driving back from New York," said Jennifer Kincade.

Sources tell ESPN there is optimism the Sixers will be able to resume play in Boston on Monday.

League sources told ESPN earlier this week that the NBA and National Basketball Players Association were discussing a plan that would require teams decimated by COVID-19 to sign additional replacement players to avoid games being postponed.

Sources told ESPN that those talks have been ongoing through the weekend.

The CDC predicts the number of COVID-19 deaths will increase over the next month, with potentially as many as 15,600 new deaths. Health professionals say the staggering rise in cases will likely lead to more canceled games.

"I think we have to remember that it's part of their job, they're in close contact with each other without masks on," said Dr. Lawrence Livornese, an infectious disease doctor and Dorrance H. Hamilton Chair of Medicine for Main Line Health. "It's not surprising that they're in a situation where there are a fair number of infections."

And as the delta and omicron variants continue to spread across the country among the unvaccinated and sometimes the vaccinated, doctors warn future lockdowns may be in the cards.

"I certainly have concerns about people in stadiums, in close quarters, watching games," said Dr. Livornese. "It's a tough calculation when to know to stop. But as our numbers are rising, I think we're going to be forced to reassess that very question."