Pool: A Social History of Segregation is open Wednesday through Friday from 11 a.m. to 5 p.m. and Saturdays from 10 a.m. to 5 p.m.
WPVI
By TaRhonda Thomas and 6abc Digital Staff 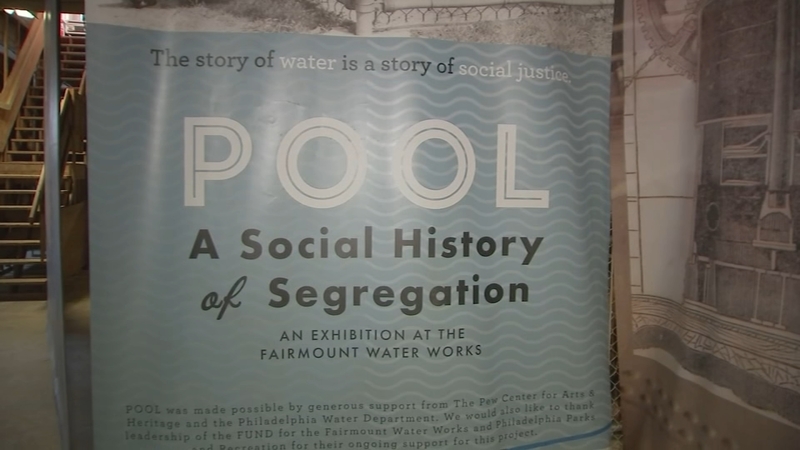 PHILADELPHIA (WPVI) -- Right next to the famed Art Museum sits Fairmount Waterworks, a facility that's more than a hundred years old and was created to pump water to the City of Philadelphia.

Now the facility is taking on a new role involving water as the host site of a new exhibit called 'Pool' detailing the history of segregation in pools and the people who broke both barriers and stereotypes.

"I think it took a complete genius to make the combination to tie together water, with pools and the importance of desegregation," said CEO Randy Hayman of the Philadelphia Water Department.

While the pool at Fairmount Waterworks was integrated, many others were segregated for decades, both locally and nationally.

"Black and brown communities have been excluded purposefully," said Victoria Prizzia who is the creator of "Pool."

She wanted to take a deep dive into that history.

"This sense of urgency wanting to bring awareness around this story," said Prizzia of what she felt after reading a book that exposed her to the history of discrimination and segregation in public pools.

She worked for years to create the exhibit, which was due to open in September of 2021 but was flooded out by Hurricane Ida.

Now restored, the exhibit is open to the public and combines art, history, and storytelling detailing the experiences of people who witnessed the troubled waters of segregated pools.

"I think this brings about awareness to where we need to be with swimming in our community," said Ellis of the exhibit.

Pool displays a history that's deeper than water. It's a story of social justice, as made evident by some of the photos on display.

One shows an African American man outside a Kentucky pool. His shirt is soaked with blood after a mob of angry white residents beat him for trying to access the pool.

Another photo shows a motel owner pouring acid into a pool as an interracial couple swam in it.

The exhibit also details the history of skillful swimming in Africa and honors African American swimmers who have achieved Olympic greatness and broken stereotypes.

"We too, as African Americans, we can learn to swim," said Hayman.

The lasting impact of being denied access to many pools for decades is also part of the lesson in the exhibit.

It's a statistic that Nile Swim Club in Yeadon is changing. As the oldest African-American-owned swim club in the country, they've made it a mission to teach children how to swim.

Nile Swim Club is featured in the exhibit.

He is one of many people excited about the exhibit, which brings an important part of history to the surface.

"This pool exhibit is so positive," said Hayman. "I think you can take it to springboard a young person's mind to become anything."

The exhibit will remain open until late September.

It will reopen next spring, remaining at Fairmount Water Works for more than a year.