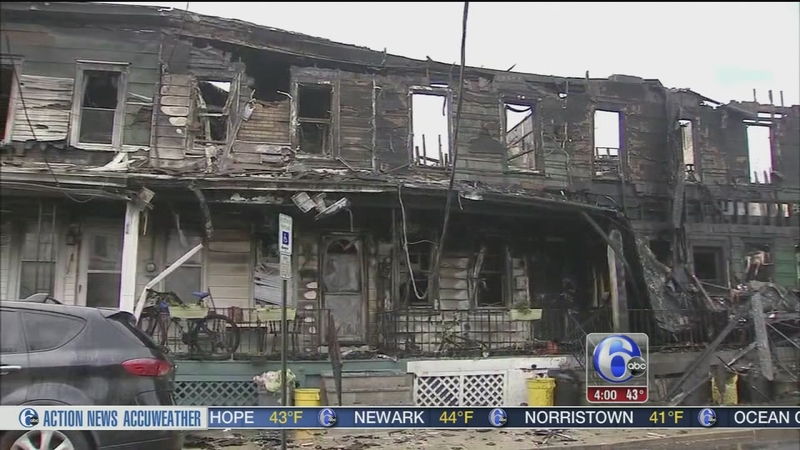 TRENTON, N.J. (WPVI) -- A burnt out shell is all that is left after a fire tore through an entire city block in Trenton, New Jersey. Some homes are completely gone and others are barely still standing.

The fire started around 3 a.m. Monday in the unit block of Weinberg Place, forcing the evacuation of the entire block.


Emily Morris tells us, "I went back to bed, I keep smelling something and when I looked to the window it was my neighbor's house was on fire."

Nine homes in all were destroyed by the six alarm blaze.

Flames have now spread to 9 homes in Trenton, 3 have collapsed. At least two people have been injured. pic.twitter.com/yOQoqNDsSn

The Szatkos are one of the families who lost their home.

Erini Szatko says, "I lost everything. I good - my life is good. My son, my husband is OK. Nobody, no people no die."

And Matthew Szatko explains, "It started over there and go more because it's very windy today."

Firefighters from area towns joined Trenton firefighters, but the fierce wind helped fan the flames, spreading through a crawl space along the roofs of the home.

Fire crews were delayed fighting the fire because when they arrived on the scene around 3 a.m. there were live electrical wires hanging in the street.

Deputy Fire Chief Leonard Carmichael explains, "Electricity and water don't mix, so because of that from a safety perspective we had to pull our firefighters back until PSE&G got here to make sure the scene was safe."

Power and gas were cut to the immediate area.

Two people were injured and taken to the hospital. The Red Cross says it is assisting 28 people and nine families.

The Cosmo Market, located right around the corner, has already begun collecting items for the families who lost everything.

Irena Sweeney works at the market, and tells us, "People come and bring us clothes and food and shoes."

Angelika Mostowska says, "I can replace all the clothes, all the TVs, computers - everything you can buy I can replace. But there's certain stuff I cannot replace."

The cause of the fire is still unknown.