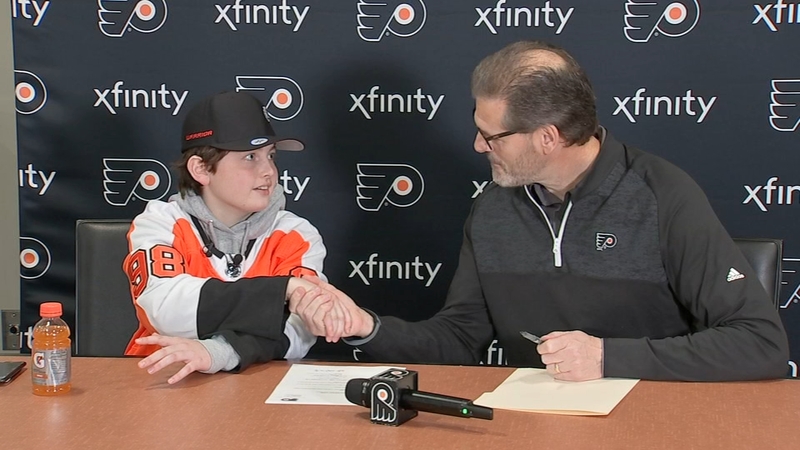 VOORHEES, N.J. (WPVI) -- Dreams came true on the ice at the Virtua Flyers SkateZone in Voorhees, New Jersey on Wednesday as a high school freshman trained with the Philadelphia Flyers, and even became a member of the team for the day.

14-year-old Luke Rogers is not just a hockey player, he's also a cancer patient, and his passion for the sport is perhaps his best medicine.

"It's pretty cool. I've always wanted to train with a NHL player and van Riemsdyk is one of my favorite players," Luke said. "His whole family grew up near me, and he's one of my idols."

Both trained at the same rink in Monmouth County. But on Wednesday, spending time on the ice with his hometown hero meant more than most could imagine for Luke, who is in treatment for an acute form of leukemia.

Luke says hockey has been healing - taking his mind off the medicine.

"Just really helped me a lot while I was not in school - I can't go to school - it just takes my mind off a lot of things," he said.

Part of the day included the Flyers signing Luke to a special one day contract.

Luke got his own locker, his own jersey, and even a pregame chat with the coach.

Luke's been skating since he was two-years-old. So, it only seemed natural to choose hockey as his form of physical therapy.

"It has really made all of the difference with his recovery. He still has a few treatments left, but he's out there on the ice doing amazing," said Luke's mom, Nancy Rogers. "It's what he lives for. It has given him the juice to continue to fight."

Even when he was at his weakest, hockey was his healer.

He was slowly able to walk again and his hair grew back and his muscles filled out - hockey saved his life.

Luke will also join the flyers for Hockey Fights Cancer Night on November 27th to read off the starting lineup.

His dream is to be a pro hockey player.

His treatment for leukemia ends in February and he says that's when his real work on the ice begins.