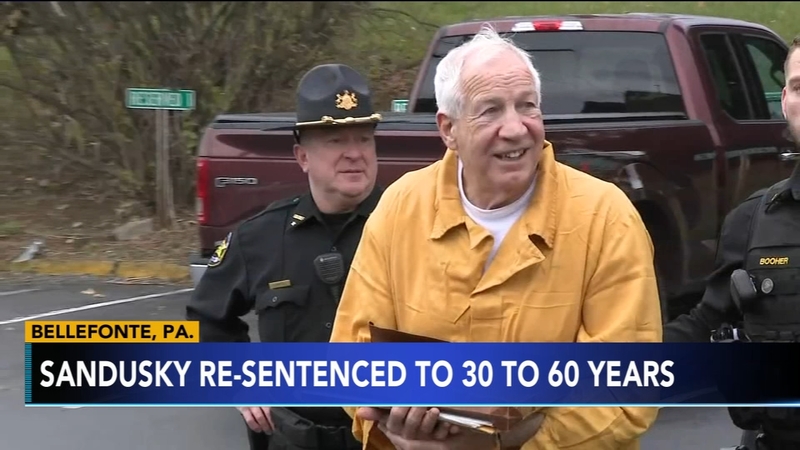 Sandusky, 75, was sentenced by Judge Maureen Skerda at the Centre County Courthouse in Bellefonte. He wore a yellow jumpsuit and entered court with his hands cuffed in front of him.

Sandusky again asserted his innocence, choked up twice in brief remarks to the judge and told his supporters he loves them.

A state appeals court this year turned down most of Sandusky's arguments seeking a new trial but said laws mandating sentence minimums in place at the time of his October 2012 sentencing had since changed.

Under the new law, according to Jacklin Rhoads, a spokeswoman for Pennsylvania Attorney General Josh Shapiro, a jury would not have the power to go below the minimum sentence.

The Superior Court opinion in February cited a U.S. Supreme Court ruling that said any fact that increases the sentence for a given crime must be submitted to jurors and established beyond a reasonable doubt.

Sandusky was convicted of 45 counts of child sexual abuse in 2012 and sentenced to 30 to 60 years. Skerda's new sentence was the same.

Eight young men testified during the 2012 trial that Sandusky, who founded a charity for at-risk youth, subjected them to a range of abuse, from grooming to violent attacks.

Sandusky has maintained his innocence, and his lawyers in October initiated a federal court action seeking a new trial or release from prison.

His November 2011 arrest prompted the firing of Hall of Fame head coach Joe Paterno and the ousting of then-university President Graham Spanier.