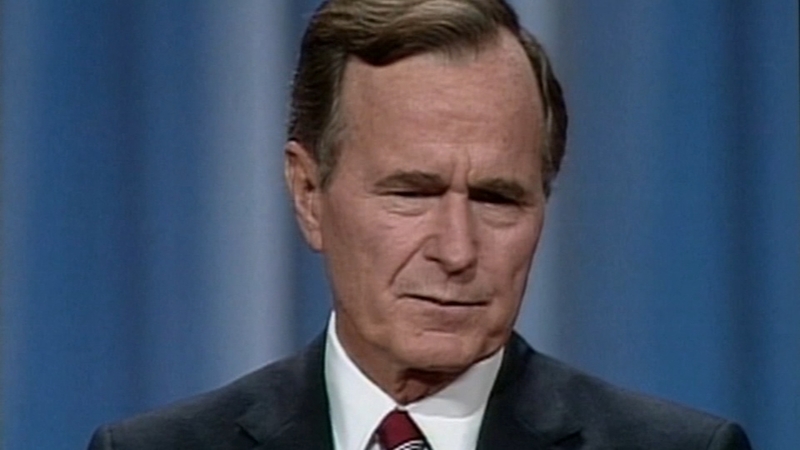 WASHINGTON, D.C. (WPVI) -- The body of former President George H.W. Bush will lie in state until funeral services on Wednesday in Washington, D.C.

His casket arrived in the nation's capital on Monday from Houston, where the 41st president died at the age of 94.

The public is allowed to walk past the president's casket in the Capitol rotunda until Wednesday morning.

People waited patiently outside for their turn to pay their respects.

The line was at its longest Tuesday evening, in the final hours President George Herbert Walker Bush lies in state.

The Bush family returned again to pay respects to their patriarch.

The family went around the rotunda shaking hands and embracing the many there to pay tribute to a president. Several times laughter rang out at a funny remark; President George W. Bush raised up a baby handed to him by a woman in the crowd.

Of the many who gathered, each had their own reason for coming to the Capitol

"He played a significant role in my life. He did a lot for Liberia, my country of origin. So I would like to pay my respects," said Jatu Katley of Bowie, Maryland.

"He was a very special man, and I just wanted to come by and pay my respects," said Donna Harris of Vienna, Virginia.

The coffin arrived at the Capitol on Monday just as the sun set, then congressional leaders from both parties participated in a solemn ceremony in the rotunda.

His son, the 43rd president of the United States, was clearly emotional during the ceremony. He will deliver a eulogy at the state funeral at Washington National Cathedral.

"I think that George H.W. Bush will go down as a great president. I think the challenges that faced him during his tenure - they were extraordinary," said Vonda D'Errico of Arlington, Virginia. "I think he was the right man for the right time."

All day long the procession moved slowly past the coffin. Tom Ridge, the former Pennsylvania governor and homeland security secretary under George W. Bush, was among them.

Those who had passed through the rotunda seemed deeply moved by the experience.

Tom Abrahams in Washington at Capitol

"It really is emotional when you get in there. It's amazing. Well, you just think about your life too, as we get older," said D'Errico.

"It's very lovely and somber, and I think thoughtful and reflective, which I think is something wonderful to see in this time and age," said Donna MacAlaester of Washington, D.C.

President Trump will be joined by other world leaders, including Britain's Prince Charles and German Chancelor Angela Merkel, at Wednesday's funeral.