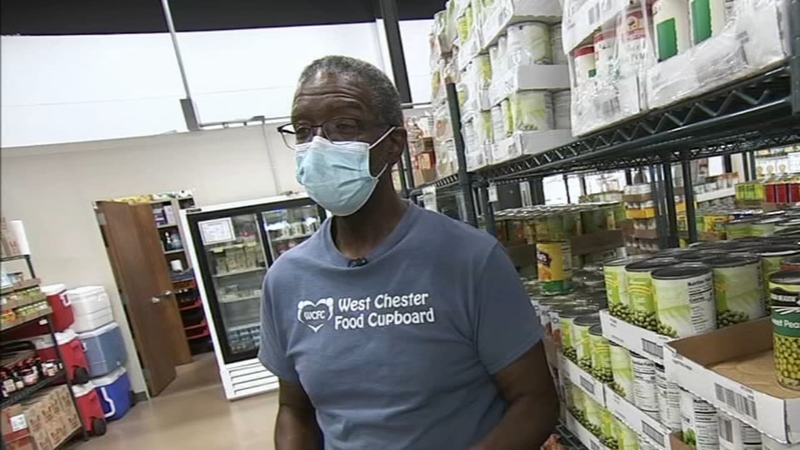 WEST CHESTER, Pennsylvania (WPVI) -- Action News is putting the spotlight on organ donation and the importance of registering as an organ donor by introducing you to some of the thousands of people in our area whose lives have been touched by the Gift of Life donor program.

A Chester County man is making every moment of his second chance at life count.

"If I've got a family of five. I get ten items from these shelves," Timmy Nelson explained as he gives a speedy tour of the workings of the West Chester Food Cupboard.

Whether volunteering at the Food Cupboard, or giving blood to the Red Cross, Nelson is on a mission to help others, in thanks for his kidney transplant.

His initial diagnosis was a total surprise.

"I was stage 3 kidney disease. My nephrologist was shocked. He said, because you don't have any symptoms," said Nelson.

"They always wondered why I had so much luggage, though, when I traveled," he said.

Four years later, he got the call for a transplant.

"They said to me: 'We have a kidney that would be appropriate for you. However, you're number four in line'," he said. He thought: "There's no way I'm going to get that kidney."

Nelson was told to expect another call in ten to 12 hours. At that point, he was told he was number three in line. With that information, he decided to cancel plans to fly out of town for a family reunion.

And he's glad he did. Two days later, he was told to get to the University of Pennsylvania right away - that kidney was now his.

In the hospital, he had time to think.

"My role is to give back now. And it's not out of guilt, it's out of commitment," said Nelson.

In addition to his other volunteer efforts, Nelson also talks to dialysis patients, sharing his tips for staying healthy. He also volunteers with the Gift of Life, to thank his donor family.

"I'm alive today because that family made that decision," he said.

The new kidney also enabled Nelson to fulfill his dream of walking his daughter down the aisle at her wedding.

"Volunteers like Timmy Nelson are a great example of going back into the community and giving back by saying - I needed help, and someone helped me," said Nathan. "One organ and tissue donor can save up to 100 lives."

Our area is the most generous in the nation on organ donation. But more potential donors are needed.