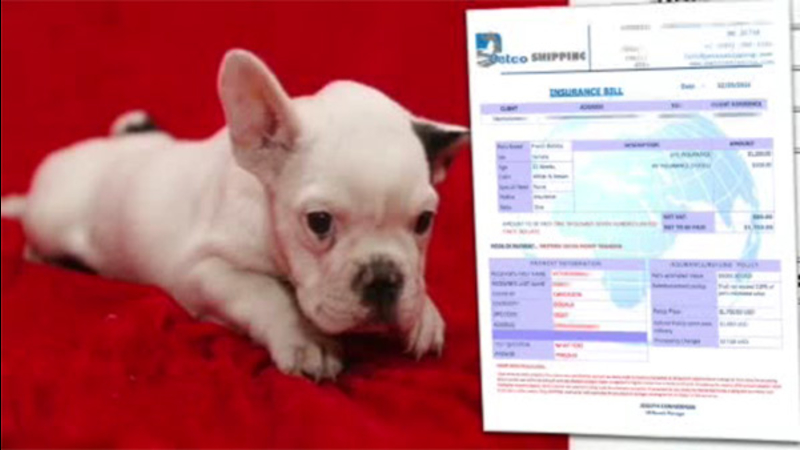 Who could resist? Adorable puppies at reasonable prices and with free shipping!

Marcie Daniels of West Deptford, New Jersey, decided to buy Zena as a Christmas gift for her grandchildren, after their cockapoo Olivia was run over and killed just one week before Christmas.

She had found and purchased four other dogs online successfully.

When Daniels had typed in "French bulldog puppies for sale," Starbullies popped up.

She corresponded with someone claiming to be Justine the breeder.

Daniels then wired $550 via Western Union, something she had done before with no problem.

Then on Christmas Eve, the day Zena's itinerary showed she was supposed to arrive, Daniels received an email from Petcoshipping.com stating that she needed to wire $1,700 for puppy insurance to Africa!

"And I'm like, 'Whoa! Whoa!' Now I was really sweating because I knew something was wrong," said Daniels.

When she reached out to PetcoShipping and Justine at StarBullies, she says ultimately she got no response.

Something similar happened to Robert Sonny Gotz in New York.

He sent StarBullies $550 for Ella.

But when he called the airport to confirm Ella's arrival, he says there was no puppy.

"The money doesn't bother me, it's what they did," said Gotz.

Gotz says he's especially hurt because Ella was supposed to be a special gift for his wife.

"We've been married 45 years. I give her everything she wants," said Gotz.

By the time, Daniels reached out to Action News, the Starbullies website had already been shut down.

But on GoldenBullies.com, we found both dogs Zena and Ella as well as Justine the so-called breeder.

We offered to buy both Zena and Ella and we were told, we could. In fact, we got an invoice for Zena.

But this website must be on the up and up, right? It includes a scam alert about fraudulent breeders.

The GoldenBullies website also has photos of the puppies' home and a physical address in Hagerstown, Maryland.

Action News went there and apparently so have a number of prospective puppy owners.

The house shown on the website is different from the house that's actually at the address provided. The actual house belongs to Carol Mooer.

"And she said they were here to look at the English bulldogs and I said, 'Excuse me?' I was shocked because I don't have dogs," said Mooer.

Mooer says she has nothing to do with the business and has no idea how her home address got on their website.

And the address for PetcoShipping? It's the leasing office for an apartment complex in Maryland.

We took our findings back to Daniels?

"There is no business. There are no puppies anywhere? Unbelievable, unbelievable," said Daniels.

We recently discovered that Goldenbullies has also shut down.

Do beware - this bogus business will likely pop up again under a different URL.

Here are some tips to help you watch out for bogus businesses:

-The websites are littered with spelling and grammatical errors - a lot of them.

-Be very wary of any business that only takes payment via wire transfer - they are virtually untraceable.