Struggling former Florida Gov. Jeb Bush found his footing in trying to discredit Trump's qualifications for the White House, chiding the brash billionaire for trying to "insult your way to the presidency."

Tuesday night's debate was the first for Republicans since the attacks in Paris and San Bernardino, California, which heightened fears of terrorism in the United States. The attacks have ignited a political debate about President Barack Obama's campaign to defeat the Islamic State in the Middle East and the nation's security posture in preventing attacks in the U.S.

Trump's call for temporarily banning Muslims from the U.S. - a proposal roundly criticized by his rivals - dominated much of the discussion heading into the debate. He said he wasn't seeking to discriminate against Muslims.

Bush dismissed the proposal as unserious, saying "Donald is great at the one-liners, but he's a chaos candidate and he'd be a chaos president."

In a moment that might help ease anxiety among Republican leaders, Trump pledged he would not seek to run as an independent. If he should lose the nomination, some fear he would make such a move, possibly preventing the nominee from defeating the Democratic challenger. "I am totally committed to the Republican Party," Trump said.

He was largely spared from criticism by Cruz and Rubio, who said they understood why Trump had raised the idea of banning Muslims. Instead, they focused on each other, engaging in lengthy debates over their differences on national security and immigration, one of the most contentious issues in the Republican primary.

Rubio, of Florida, defended his support for eventually providing a pathway to citizenship for some people in the U.S. illegally, an unpopular position within the Republican Party. Rubio was a co-author of comprehensive Senate legislation in 2013 that would have created that pathway, but he has since said the nation's immigration crisis must be addressed in piecemeal fashion, with legalization only an option after the U.S.-Mexico border is secured.

Seeking to draw a sharp contrast with Rubio, Cruz went further than he has previously in opposing legalization for people in the U.S. illegally. He declared: "I have never supported legalization and I do not intend to support legalization."

The two senators - both Cuban-Americans in their 40s - have been sparring from afar for weeks, and their rivalry could become one of the dominant forces in the race as the first voting contests in February draw near. The Texas senator is on the rise, particularly in Iowa's kickoff caucuses, and is casting himself as a more electable alternative to Trump, while Rubio is seeking to straddle the divide between his party's establishment and more conservative wings.

Rubio positioned himself as the hawk on national security, defending American efforts to oust dictators like Syria's Bashar Assad from the Middle East. He also accused Cruz of weakening the government's ability to track terrorists because he voted in favor of legislation to eliminate the National Security Agency's bulk phone-records collection program and replace it with a more restrictive effort to keep the records in phone companies' hands.

"We are now at a time when we need more tools, not less tools," Rubio said. "And that tool we lost, the metadata program, was a valuable tool that we no longer have at our disposal."

Cruz argued that his vote helped "reform how we target bad guys" by allowing the government to search more phone numbers.

"Marco knows what he's saying isn't true," he said. "What he knows is that the old program covered 20 percent to 30 percent of phone numbers to search for terrorists. The new program covers nearly 100 percent."

Beginning after the Sept. 11, 2001, terror attacks, the NSA secretly collected the daily calling records - but not contents of conversations - for most Americans, including people never suspected of any crime.

A new law, called the USA Freedom Act, passed in June with broad, bipartisan support. It ordered the NSA to end bulk collection after a six-month transition that expired last week.

The senators also displayed differences in their strategies for targeting the Islamic State. The extremist group claimed responsibility for the Nov. 13 attacks in Paris, and one of the shooters in California pledged allegiance to the group on Facebook shortly before she and her husband shot and killed 14 people at a holiday party.

Cruz called for using "overwhelming air power" to destroy the Islamic State, while Rubio said airstrikes would have to be supplemented by ground troops, including American special operations forces.

President Obama has largely relied on airstrikes to target the militants in Iraq and Syria. However, he's also sent troops to Iraq to help train and assist local forces and recently approved sending special operations forces into Syria.

New Jersey Sen. Chris Christie, who has been on the rise in New Hampshire, sought to assert himself in the national security discussions. He called for a no-fly zone over Syria and vowed to shoot down a Russian plane if it were to violate that space.

"Not only would I be prepared to do it, I would do it," he said. "We would shoot down the planes of Russian pilots if, in fact, they were stupid enough to think that this president was the same feckless weakling that the president we have in the Oval Office is right now."

The debate's focus on national security was a detriment for Carson, who has struggled on complex international matters. He punted on questions about surveillance and his own qualifications for being commander in chief.

Carson has also raised the prospect of running as a third-party candidate, but like Trump, he ruled that option out in the debate. 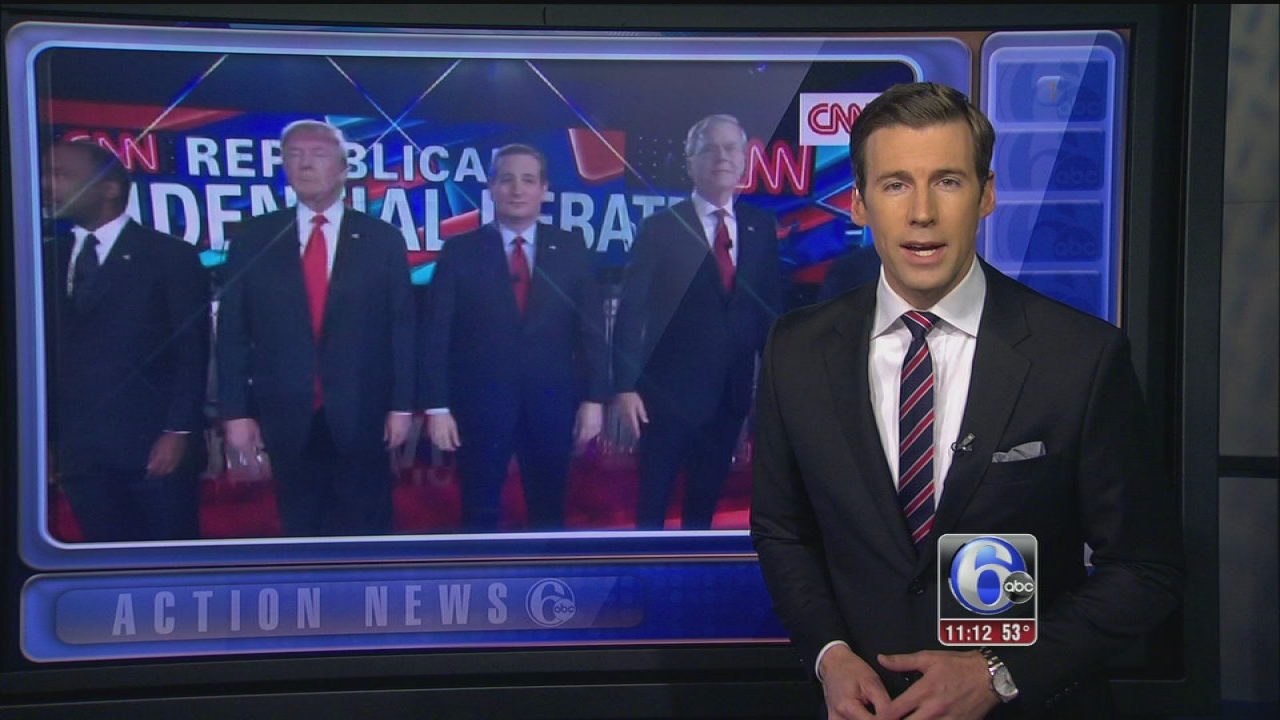 The Cough That Consumed the GOP Debate

Bush on Trump: He'd Be a 'Chaos President'