Wolf has vowed to veto any legislation "that would overturn a woman's right to choose."
WPVI
By 6abc Digital Staff 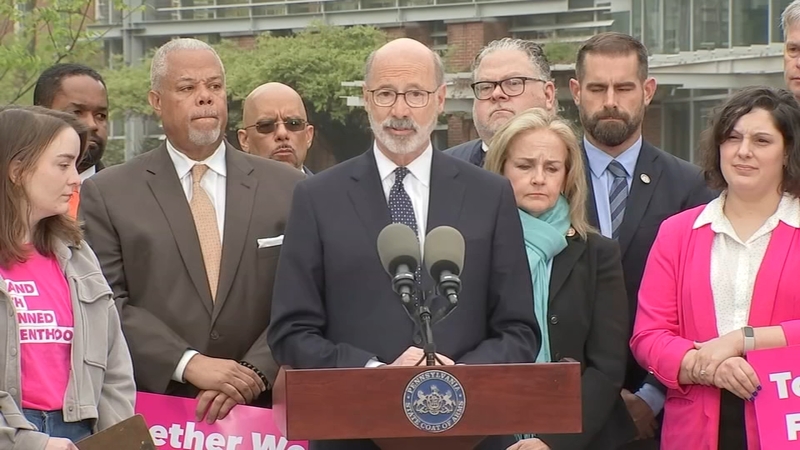 PHILADELPHIA (WPVI) -- Pennsylvania Governor Tom Wolf was in Philadelphia Wednesday morning to reaffirm his pledge to protect access to abortion in the state.

The gathering came just days after a draft opinion was leaked, indicating the Supreme Court could vote to overturn Roe v. Wade and leave it up to the states to decide their own abortion policies.

RELATED: Where do lawmakers stand on abortion rights in Pennsylvania, New Jersey and Delaware?

The Supreme Court confirmed the leaked draft, first published by Politico, was an authentic document but said Tuesday "it does not represent a decision by the court or the final position of any member on the issues in the case."

Though the draft opinion could change, Democrats and Republicans across the states pledged action amid warnings such a ruling could also put other rights at risk -battles that could likewise play out in the states.

"I don't think it's possible to overemphasize the seismic shift this represents in America's approach to privacy, to personal autonomy and to healthcare rights," Wolf said Wednesday.


Wolf has vowed to veto any legislation "that would overturn a woman's right to choose."

However, things could change in the Keystone State since Wolf is in the last year of his governorship, making abortion rights a hot-button issue in this year's gubernatorial election.

If the Supreme Court decides to overturn Roe v. Wade, Congress could step in to pass a federal law to protect abortion rights.

"This bill would protect a woman's right to continue or end a pregnancy. I call on Congress to pass it immediately," said Wolf.

It passed in the House, but passage in the Senate is almost unthinkable, requiring support from 10 Republicans and all Democrats to beat a filibuster.

Including a "yay" from Pennsylvania Senator Bob Casey, who describes himself as a pro-life Democrat. Casey has not signified that he'd vote with his party.

"I think Senator Casey is like a number of people who have personal issues with the idea of abortion," said Wolf. "It doesn't really matter what you feel about those things. What you want is you allow that woman to make that decision."

So, who is getting abortion procedures in PA? Our Data Journalism team found:

- 53% are having their first abortion.