"It was almost deafening how loud the force of that water was," the executive director said.
WPVI
By Beccah Hendrickson 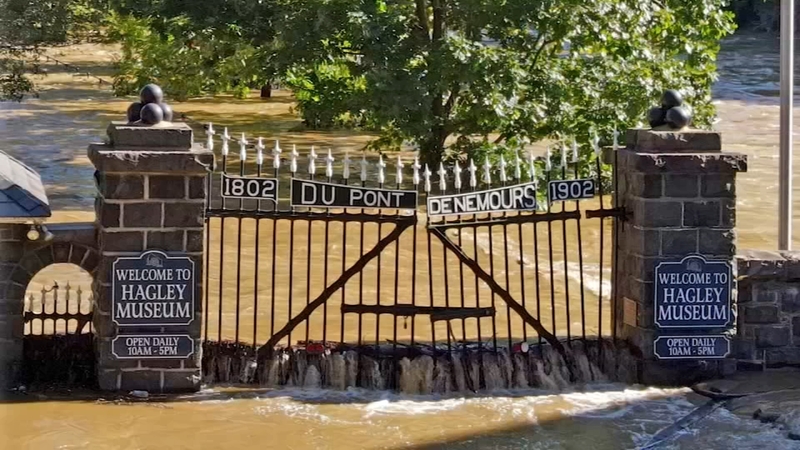 The lower half of the 245-acre property sits on the Brandywine Creek, which rose up to 23 feet during the flood.

The water knocked out walking paths and basements of buildings, damaging the 200-year-old gunpowder yard.
"It was almost deafening how loud the force of that water was," said Jill MacKenzie, the executive director of the museum.

She stayed sheltered until sunrise, when the stark contrast between the property before and after the rain became apparent.

"You know, you can hear the water in the background right now and it sounds lovely and peaceful. Well, it was anything but that," she said.

"It's the most horrible use of the word awesome, but it was awesome to watch that," said MacKenzie.

The flooding affected about half the property, the part which used to be DuPont's powder yard. It's a walking tour that offers a tour of American industry.
"We'll rebuild this," vowed MacKenzie, who says the ground's visitor center had 180,000 gallons of water inside after the storm.

"All of the systems for what we call the lower property fed through that building, so they all have to be replaced," she said.

Dozens of residents in Wilmington, Delaware, are trying to figure out how to recover after major flooding from Ida last week.

Two weeks after the storm, the rebuild has only just begun. The museum hopes it will get help from FEMA for an estimated $2 million in damage.

MacKenzie said it will take months "to make this place as strong as we can to withstand the inevitable floods that we know are going to happen again."