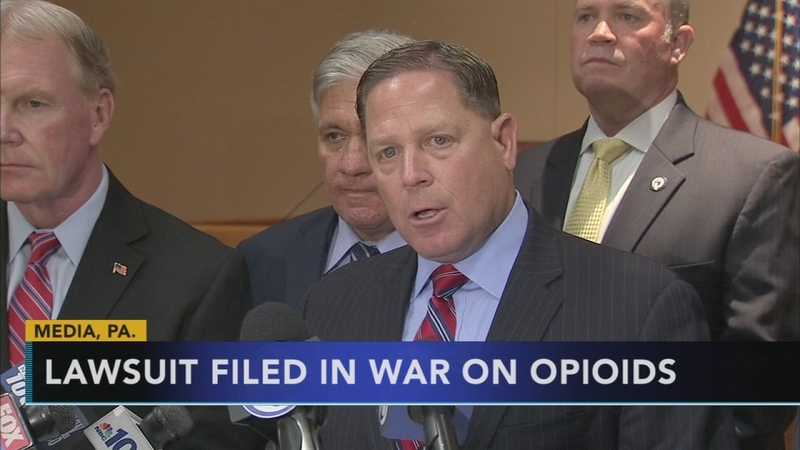 The county alleged in its complaint that the companies and three consulting physicians engaged in promotional campaigns that encouraged prolonged and widespread use of their powerful painkillers, despite knowing that in doing so consumers risked damaging health effects and addiction.

The effort has been extremely profitable for drugmakers, the suit alleged, noting that in 2015 opioid sales earned the industry almost $10 billion. In that same year, more than 33,000 people died from opioid overdoses, according to the federal Centers for Disease Control and Prevention, which says that nearly half of those deaths involved prescription drugs such as OxyContin or Vicodin.

"We will fight this national epidemic of senseless death and destruction with civil litigation," District Attorney Jack Whelan said in a statement that calculated that almost 90 percent of the county's 167 drug deaths this year were linked to opioids.

Some of the companies named as defendants have previously said that they are already taking steps to stem the opioid crisis. Phone messages or emailed requests for comment were not immediately returned by company representatives from Purdue Pharma and Teva Pharmaceuticals. Attempts to reach the consulting physicians were also unsuccessful.

A statement from Endo said the pharmaceutical company said they share regulators' goal of preventing misuse of opioid products but added that they do not comment on pending litigation. A statement from Janssen spokesman William Foster said "the allegations in these lawsuits are both legally and factually unfounded."

The lawsuit is one of the latest in a string of legal cases that have pitted state and local governments against the pharmaceutical industry. Delaware County said its lawsuit is the first filed by a Pennsylvania county.