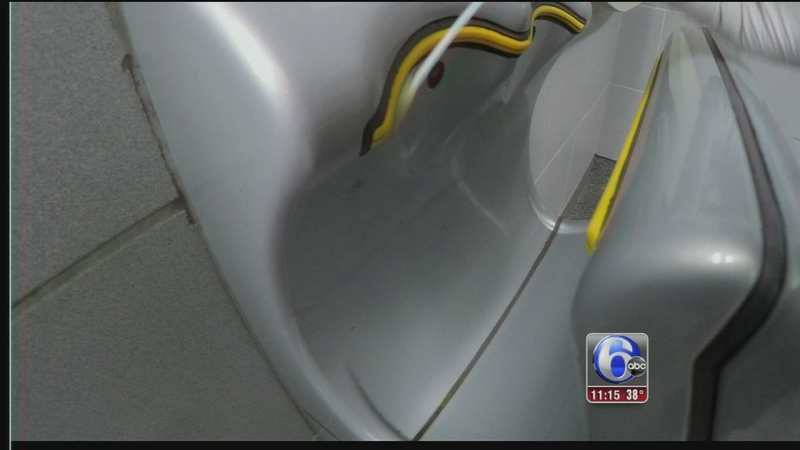 These state of the art gadgets are supposed to be eco-friendly, but it turns out, might expose you to potentially dangerous bacteria that could make you sick.

We found germs, and what an expert says are unsanitary conditions, with some Dyson Airblade dryers.

Those are the dryers that you stick your hands inside.

Our team went undercover and swabbed more than a dozen of them, and found some had germs that could lead to serious infections.

Working with the lab at Thomas Jefferson University Hospital, Action News collected dirt and grime around the vents of more than a dozen Dyson Airblade dryers.

No dryers were off limits.

Our team swabbed inside bathrooms in restaurants, a grocery store, and even a cycling studio.

We also visited a popular tourist attraction, plus two casinos and warehouse clubs, searching for germs that could potentially be lurking inside.

Dr. Amity Roberts analyzed the samples for bacteria including Klebsiella oxytoca that can cause fever, nausea and vomiting, and Enterobacter cloacae which could lead to a serious respiratory infection.

"Those are organisms that are found in stool specimens; they can make you very sick," Roberts said.

It was inside a men's room at the Costco in Warminster, Bucks County where we found one of the dirtiest hand dryers. Our sample turned up a heavy presence of that bacteria that could cause stomach bug symptoms.

"I would not want to be placing my hands or a child's hands in these particular dryers," Roberts said.

Costco told Action News they are now making sure their dryers are going through proper maintenance, including changing the HEPA filters on the recommended schedule.

Inside the ladies room at the Independence Visitors Center in Old City, a dryer turned up an explosion of germs.

"We had very heavy growth of Klebsiella oxytoca, we also had growth of Enterobacter cloacae," Roberts said.

They are levels Dr. Roberts says are troubling.

CEO James Cuorato of the Independence Visitors Corporation tells Action News their protocol is to clean the hand dryers daily, according to the manufacturer's specifications. But he admits, it's a difficult job maintaining public restrooms.

"We are going to immediately begin cleaning the dryers on a much more frequent basis," Cuorato said.

Perhaps the most surprising results came from a dryer inside a Bareburger in Center City.

Dr. Roberts found a light growth of Staphylococcus aureus, a pathogen that could lead to a serious staph infection

"It can cause a very severe skin infections if you have a cut or wound and get exposed to it," Roberts said.

Calls and an email to Bareburger to find out how they clean their dryers went unanswered.

But, the bottom line, Dr. Roberts says, you are still better off washing your hands than not.

"There are a lot of people who are going in and out of these restrooms and you don't know whose bacteria you are exposing yourself to," Roberts said.

On the other dryers we tested, the bacteria found was either not harmful or not enough to possibly make people sick

Dyson said their research found their dryers are as hygienic as using paper towels, when they are cleaned and maintained to their specifications. They have a HEPA filter inside, which they said removes 99.7% percent of particles the size of bacteria and viruses.